Pakistan and Iran have vowed not to allow use of their soil for terrorism and decided to improve the security situation at the border and take concrete steps for curbing smuggling and illegal border-crossing.

It was decided at a meeting of the Pak-Iran Joint Border Commission held in Gwadar on Sunday.
The two countries signed several memorandums of understanding after the meeting.
Balochistan Chief Secre­ary Aurangzeb Haq led the Pakistani side, while Deputy Governor of Sistan-Baluch­estan province Ali Asghar Mir Shikari headed the Iranian delegation at the meeting.
The two sides discussed various issues pertaining to border security, drug smuggling, illegal immigration, the Rahdari system and cross-border trade.
Official sources said that proposals for increasing volume of bilateral trade and improving the security situation at the border were also discussed. It was decided that security officials from both countries would play an active role in improving the security situation in border areas.
It was also decided that the border officials concerned would remain in contact with each other and take strict steps against terrorism.
“The two countries would not allow anyone to use their territory for terrorism and terrorist activities,” the sources said, adding that some joint subcommittees comprising officials of both the countries had been constituted to monitor progress on the issues and submit reports to their respective governments.
Both sides expressed determination to prevent drug smuggling and intrusion of illegal immigrants. The meeting also decided to take measures for encouraging legal trade and import of oil from Iran, and in this connection border markets would be set up.
Gwadar Port Authority chairman Dostain Khan Jamaldini briefed the Iranian delegation on the importance of Gwadar Port and the China-Pakistan Economic Corridor.
Officials of the two countries visited Gwadar Port and other projects launched in the town.
Home Secretary Mohammad Akbar Harifal, IGP Ayub Qureshi, Makran Division Commissioner Bashir Ahmed Bangulzai and Gwadar Deputy Commissioner Naeem Bazai attended the meeting.
Iranian Consul General in Quetta Aka Mohammad Rafi assisted the Sistan-Baluchestan governor, along with other Iranian officials. 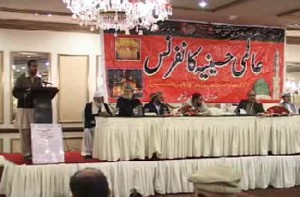