Majlis-e-Wahdat-e-Muslimeen (Assembly of Muslims Unity) Pakistan had given a call for a rally to condemn unabated genocide of Pakistani Shia Muslims. They shouted no to terrorism and no to Israel. They vowed to surround the chief ministers, governors’ houses of the provinces and Â also surround the Parliament as a token of condemnation and protest if the genocide is not stopped.

According to the Shiite News Correspondent, Thousands of youths, women and children and elderly persons thronged the M.A. Jinnah Road near mausoleum of founder of Pakistan Mohammad Ali Jinnah. They wanted to move to Tibet Centre but police prevented them because of section 144 under which the administration had banned rallies. After negotiations, the protestors were allowed to end their rally at Imam Bargah Ali Raza.

They had lifted banners, placards and posters. They were raising slogans against the terrorists and blamed the United States and Israel responsible for the genocide of all Muslims across the world.

They were of the views that terrorism against humanity all over the world and genocide of Shia Muslims were two parts of a deep-rooted conspiracy of the Zionist-controlled U.S. administration. The colonial and self-imposed mandatory powers of the pre-U.N. era and the U.S.-led global imperialistic alliance want to advance their illegitimate interests in Pakistan and in whole of the region. For that purpose, ethnic, sectarian and religious tensions are artificially invented.

“Since they have failed to sort out problems they themselves gave birth to, they have internationalized these problems and exported it to every nook and corner of the region, world and also in Pakistan,” said Raja Nasir Abbas citing the imposition of an unjust solution in Palestine and formation of anti-Islam terrorist outfits.

He referred to the U.S. secretary of state Hillary Clinton and said that she admitted last year that the U.S. made a mistake by supporting terrorists but her words don’t match the actions of the U.S. administration and its allies.

Allama Hassan Zafar Naqvi said that hypocrites within Pakistani society cannot deceive Pakistanis. He said that genocide of Shia Muslims was being conducted by those who want to defame Islam and Pakistan. “

“Pakistani Sunni and Shia Muslims are united and they know well how to respond to the mastermind of anti-Islam terrorism,” he asserted.

“Despite all sorts of cooperation by the governments and nations, U.S. failed to defeat terrorism because they lack will to do so. Zionists wanted to equate terrorists with that legitimate resistance of Palestinians and Lebanese people,” he said.

“Pakistan and Iran are brotherly countries and their shared values are natural, genuine and legitimate unlike the U.S. or any other country in the region or across the world,” said Mr. Karbalai.

Majlis-e-Wahdat’s leaders demanded of Pakistani policy-makers and decision-makers to reject the illegitimate U.S. demands that have come from a colonial/imperialistic and arrogant mindset.

They warned the rulers to ensure the safety and security of lives, properties and honour of all Pakistani Shia Muslims. They demanded that Shia Muslims must not be deprived of any of their inalienable human rights and Constitutional rights. They warned that all overt or covert plots aimed at preventing Shia Muslims to practice their religion according to Islamic obligations and recommendations would cost the enemies dearly.

“Neither we have usurped any right of any Pakistani nor shall we allow any other person to usurp our inalienable human rights.” Hassan Zafar Naqvi warned.

Participants were of the views that no Shia Muslim should be made scapegoat for anti-terrorists operation. It is Pakistan’s government and intelligence agencies to decide how to thwart terrorists but Shia Muslims must not be asked to pay the price for that. Terrorism is problem of whole of the world and whole of Pakistan. Therefore, don’t look for lame excuses or artificial justification for an anti-terrorists operation.

The protestors commented that Shia Muslims must not be equated with those terrorist outfits who themselves claimed responsibility for genocide of Shia Muslims.

Since 1990s, Shia Muslims were massacred in the mosques while offering prayers and at majalis-e-aza and juloos-e-aza (condolence congregations) while mourning the anniversaries of martyrdom of Ahl-al-Bait (House of Hazrat Mohammad, the last apostle of Allah and Prophet of Islam).

Alongside, Shia doctors, educationists, lawyers, other professionals, business tycoons, shopkeepers, women and children were also killed in target-shootings in all over Pakistan. 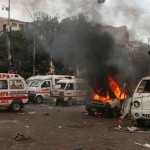