The Foreign Office (FO) on Monday rejected an Afghan governor’s allegation that the Pakistan Army’s Operation Khyber-IV was meant to push militants into Afghanistan.

“The militants, most of them influenced by [the Pakistani military], are sent across the Durand Line. It [the Pakistani military] wants to show that it has cleared its areas from terrorists,” Afghan province Kunar’s Governor Whaheedullah Kalimzai had alleged, according to reports in Afghan media.
The FO spokesperson “underlined that such statements were contrary to the spirit and understanding arrived at during recent engagements at the leadership level of the two countries.”
A statement issued by the Foreign Office read, “The political leadership of the two countries [Afghanistan and Pakistan] had agreed that the two sides would coordinate and cooperate in their action to eradicate the menace of terrorism”.
Islamabad stated that Pakistan has received no support from Afghanistan despite being assured of it prior to the beginning of the Khyber-IV operation.
Last month, the Afghan Defence Ministry’s Spokesman Dawlat Waziri had claimed that Pakistan had not carried out any coordination while launching the military operation in the Rajgal Valley despite an understanding about having coordinated operations on both sides of the Durand Line.
“Afghan Ministry of Defence’s response to Operation Khyber-IV is unwarranted and runs counter tothe Pakistan Army’s efforts for better Pak-Afghan coordination and cooperation,” a military spokesman had responded. 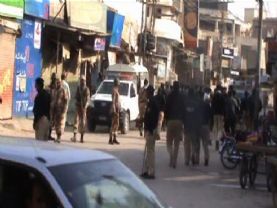 Involvement of military, judiciary in Pakistan politics criticised at Senate