Namaz-e-Janaza of four Shia Muslims including a woman was held in Quetta Hazara Town today. The victims of terrorist attack were laid to rest amid slogans of Labbaik Ya Hussain (AS).

The martyrs belonged to the Quetta-based Hazara Shia community were martyred. Takfiri terrorists of proscribed ASWJ Ramzan Mengal group opened fire on their vehicle near Balochistan’s Mastung area on Wednesday, police sources said.
The martyrs were identified as Murtaza, Mohammad Asif, Ghulam Sarwar and Rukhsana Bibi. They were residents of Hazara Town Quetta. Abdul Sattar, driver of the vehicle was also injured in the attack. He hails from Hyderabad (Sindh).
Balochistan has been experiencing incidents of violence and targeted killings since more than a decade. More than 1,400 incidents targeting the Shia including Hazara have taken place in the province during the past 15 years.
While sectarian terrorism in Balochistan has disproportionately targeted the Shia Hazara community, easily identifiable because of their distinctive physical appearance, other Shias — especially pilgrims travelling to and from Iran — have not been spared either. 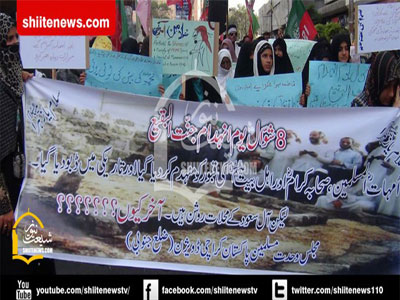 MWM observes the anniversary of demolition of Jannat ul Baqee