The youths had inscribed slogans for the liberation of Palestine and al-Quds as its capital and appealed to people to largely participate in the International Quds Day rallies. But, Khairpur administration, handpicked officials of PPP Sindh government ordered its removal that has disappointed and angered pro-Palestine Pakistanis.
People are asking whether PPP is Zulfikar Ali Bhutto’s party who always defended the legitimate cause of Palestine. 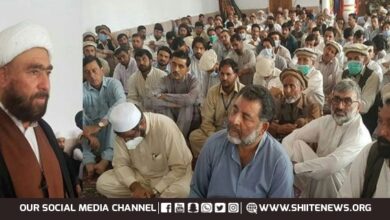 Turi Bangash tribe have a history of sacrifices for the sake of Pakistan: Allama Mazahiri

Black Armbands to be Worn during Eid Prayers, MWM