The Saudi Wahhabis co-religionists in the takfiri terrorist group Daesh (ISIS) group on claimed it had killed two Chinese nationals who were abducted from Quetta last month. China and Pakistan both have said they are probing the IS claim that two abducted Chinese teachers have been killed.

A senior government official, on condition of anonymity, told Dawn.com that an investigation into the IS claim is underway.
The claim came hours after Inter-Services Public Relations released details of a three-day operation in the Mastung area of Balochistan earlier this month targeting ‘IS facilitators’, in which security forces had killed 12 “hardcore terrorists, including two suicide bombers”.
The official said that the vehicle used in the kidnapping of the Chinese was found during the Mastung operation. “We cannot confirm the claims made by the IS right now,” the official said.
Two security officials in Islamabad quoted by AP added that no bodies have been found during the ongoing investigation.
Chinese Foreign Ministry Spokeswoman Hua Chunying told the official Xinhua News Agency Friday that the government was seeking information from Pakistani authorities.
At a news briefing, Chunying said that Pakistani authorities told Chinese authorities the abducted teachers are ‘probably dead’.
“We have taken note of relevant reports and we express our grave concern. We have been trying to rescue the two kidnapped hostages over the past days,” Hua was quoted as saying.
The two Chinese nationals, a man and a woman, were teachers at a private language school in Quetta. They were kidnapped from the Jinnah Town neighbourhood on May 24 by gunmen dressed as police who stopped their car.
A bystander who attempted to intervene was shot and wounded while rescuing a third person.
A statement late Thursday from the IS news agency said the two Chinese teachers had been killed.
Thousands of Chinese work in Pakistan and have sometimes been targeted by militants.
Amid Beijing’s growing concerns about the safety of two of its abducted nationals, the National Security Committee also reviewed the security of China-Pakistan Economic Corridor projects and Chinese nationals based in the country.
Following the abduction, 11 Chinese nationals living in the vicinity under tight security were shifted to Karachi for their departure to China. 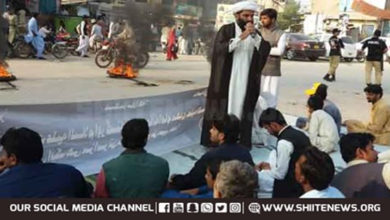 Pakistanis-Iranians have great love, respect for each other, Marriyum Aurangzeb