Sahibzada Abul Khair Zubair, chief of Jamiat Ulema-e-Pakistan, a Sunni religio-political party, has said that Syria, Iraq and Iran rendered sacrifices in their legitimate fight against the Wahhabi takfiri terrorist group Daesh but Saudi military alliance is being patronized by the United States that itself created Daesh aka ISIS group.

In an interview, he opposed the Pakistan’s joining the Saudi military alliance saying it would end the neutral position of Pakistan and make it a party in the dispute between Muslim nations. He said Syria, Iran and Iraq who are fighting against the Daesh group have not been invited to join the Saudi alliance so how Saudi military alliance could be said an anti-Daesh alliance?
“First, think of the Russian and Chinese positions on the issue of Syria. They are backing Syria against the US-led bloc and where Pakistan wants to go? If our rulers want to oppose Russian and Chinese position on Syria,” he asked.
He said that Pakistan’s pro-Saudi policy would sabotage its China-Pakistan Economic Corridor (CPEC) project and its relations with Russia as well.

No organised presence of IS in Pakistan, says Nafees Zakaria 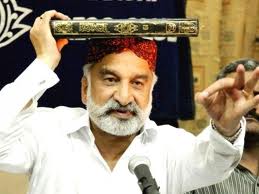