It has been revealed that Sindh Home Department had warned about possibility of suicide attack on the shrine of Hazrat Lal Shahbaz Qalandar in Sehwan Sharif on February 12, four days before the incident.

As per details, Sindh Home Department had written letters to different institutions in which it had warned about the possibility of terror attacks at different shrines and public places.
It was also mentioned in the letter that suicides attacks can be carried out at shrines of Hazrat Lal Shahbaz Qalandar, Hazrat Abdullah Shah Ghazi and other public places.
Home department had also proposed to handover the security of these shrines to Pakistan Army and Rangers, but government once again failed to take the precautionary measures.
It is pertinent here to mention that due to this security lapse, at least 76 people were martyred and over 250 others were wounded yesterday when a suicide bomber blew himself up inside the crowded shrine of Hazrat Lal Shahbaz Qalandar in Sehwan Sharif. 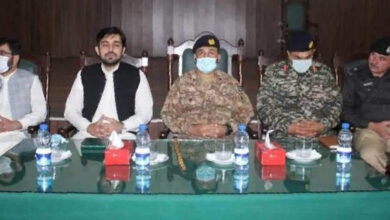