In an event of ‘State Terrorism’, Saudi-funded Pakistani Police without any warrant raided a women seminary in Hussainabad area of Sahiwal.

According to reports received, Punjab police raided a renowned shia women seminary not only without a warrant but as well without a reason or information.It is not only a violation of the law but social and ethical values.

It is pertinent to mention here that varied analyst have pointed out a deep conspiracy being plotted against the peace in Pakistan through a sectarian divide. Adding fuel to fire, the government is adamant to bring about a rift between the peaceful and loving nation of Pakistan, oppressing a particular faction on their genus’ directive.

It is a established fact that the only country that wishes ill for the shiites across the world is Saudi Arabia, prevailing anti-islamic ideology throughout the middle east, waging war against anyone who defies their principles.

The current regime of Pakistan (PML-N) has knitted and vested interests with the Kingdom itself, in return their wishes are granted at the hands of Banned outfits roaming free in Pakistan promulgating terrorism and target killing. 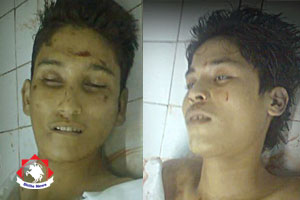 Two shia gunned down in Karachi

Defence of Pakistan Day against Indian shelling observed across Pakistan