It may be recalled that a video of Mufti Ismail Toro went viral on social media, in which he went so far as to defend the guilt of Mufti Aziz-ur-Rehman who abused a student that he had crossed all boundaries.

Shiite News: Action on Shia News, Mufti Ismail Toro from Rawalpindi, who uttered insulting words against the Companions of Holy Prophet(PBUH) in support of the sin of Mufti Aziz-ur-Rehman, the central leader of Jamiat Ulema-e-Islam (JUI-F) Has been arrested.

According to details, Mufti Ismail Toro, who committed blasphemy in favor of accused of unnatural offence, Mufti Aziz-ur-Rehman of Jamia Manzoor-ul-Islam, was arrested. According to Rawalpindi police spokesman, a case under section 298A has been registered against Muhammad Ismail Toro in Ratta Amral police station and he has been arrested. The accused of blasphemy will be produced in the next court and action will be taken as per law.

It may be recalled that a video of Mufti Ismail Toro went viral on social media, in which he defended the guilt of Mufti Aziz-ur-Rehman who abused a student by alleging companions of Holy Prophet (PBUH) in same ashamed activities.

He had said in his speech that this has been happening even in the time of Sahaba. His video went viral on social media, after which Shiite News immediately raised its voice against the blasphemous act and then social media users demanded action against him. 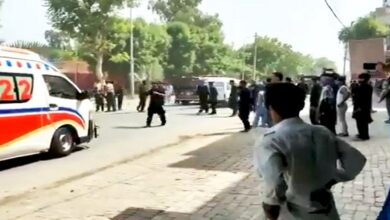