On May 7, 2004, a suicide bomber hit Jamia Masjid-e-Haideri leaving several namazis martyred and around 200 faithful injured.
Masjid-e-Haideri is situated in Sindh Madressa tul Islam where founder of Pakistan Mohammad Ali Jinnah had got education. As a matter of fact, Mr. Jinnah was a Shia Muslim. The victims of Friday terrorism were also Shia namazis.
They were offering Friday prayers when they were made target of the suicidal attack. Then President of Pakistan called it a heinous act of terrorism. A federal minister believed that a terrorist outfit was involved in the attack. Later, police had arrested a terrorist who police said had claimed responsibility for the gruesome attack.
The incident, however, was later turned into a show of inter-sectarian unity of Muslims otherwise the terrorists made them target to breach the unity of Shia-Sunni Muslims. Sunni Muslims had come forward and actively participated in the rescue/relief operation following the attack.
Lashkar-e-Jhangvi that claimed the responsibility for the attack is off-shoot of Sipah-e-Sahaba that was banned in 2001. Both organisations are still operating. Sipah-e-Sahaba has renamed itself and Lashkar-e-Jhangviâ€™s chief has been freed in Punjab province and he speaks public meetings.
On the one hand, Defence of Pakistan Council has welcomed banned Sipah-e-Sahaba in its fold and on the other hand banned Sipah-e-Sahaba has arranged LeJâ€™s Malik Ishaqâ€™s public meetings. Federal and Punjab Governments seem to have struck a deal with them.
Whatever the case, it conveyed a clear message to Pakistani Shia Muslims that they are denied their inalienable rights because the said two terrorist outfits call Shia Muslims as infidel. They publicly call for genocide and pogrom of Shia Muslims.
Therefore, blood of the martyrs of May 7, 2004 call for accountability and first of all an end to all freedoms being enjoyed by the terrorists. The sacred blood of the martyrs call for exemplary punishment to all the terrorists and their patrons.
May 7, 2012 has brought this message to all. Shia Muslims reject anti-terrorism claims of the Government of Pakistan and provincial governments. Shia Muslims turn down Defence of Pakistan Council as Defence of vested interests of terrorists because of incontrovertible facts.
History bears witness they all are on wrong side of history and justice. They take sides of terrorists. At least, martyrdoms at Masjid-e-Haideri tragedy demand an accountability of all these notorious terrorists and those who have ignored the sacred blood of the martyrs. 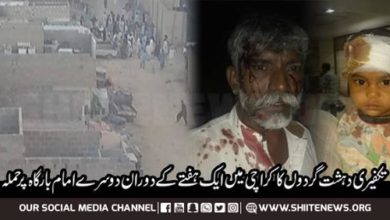