He participated in the rally that began from Taiser Town and culminated at Lasbela Chowk.

Moreover, police official Ayaz Brohi hugged ringleaders of banned terrorist outfit Sipah Sahaba (ASWJ). He posed to make it feel that he takes pride in his affiliation with those thugs.

The notorious Lashkar-e-Jhangvi is a subsidiary of outlawed Sipah Sahaba named after its founder Haq Nawaz Jhangvi.

Both these outfits are known as mother of all terrorism in Pakistan.

In theory, state of Pakistan has imposed ban declaring them outlawed group.

But, in practice, the thug ringleaders of these outfits such as M Ahmed Ludhianvi, Aurangzeb Farooqui, Rab Nawaz Hanfi, Taj Hanfi continue to lead hatemongering violent extremists and terrorists, freely.

Hypocritic approach to deal with aforesaid terrorist outfits has tarnished Pakistan’s image across the world.

Due to Ludhianvi-Farooqui terror network, worldwide condemnation always remained aimed at Pakistan as a nation-state. 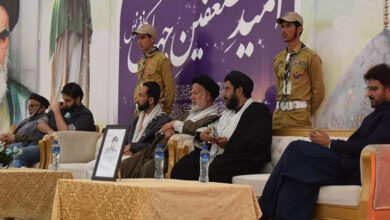 US will continue pressure on Pakistan until change in regional policy