GB Minister for Agriculture discussed issues relating to his department.

Moreover, he also apprised the GB Chief Minister of grievances of his constituents in Skardu.

He also elaborated overall situation of the entire Baltistan region.

Kazim Meesam lamented injustices done to Baltistan throughout the history.

While citing injustices during the tenure of former governments, Chief Minister GB emphasized the need for remedial measures.

Khalid Khurshid said he sees whole GB as near and dear but he also agreed with the minister’s point of view.

Furthermore, he assured of record development work and progress in Baltistan during his tenure as GB CM.

While talking to the media on the occasion, he also slammed the parties who ruled GB in the past but did nothing for the region.

As a nominated candidate of Majlis-e-Wahdat-e-Muslimeen, Kazim Meesam had won GB election from Skardu.

Youm-ul-Quds to be observed following the precautionary measures

ISIL formally announces its presence in Pakistan and Afghanistan 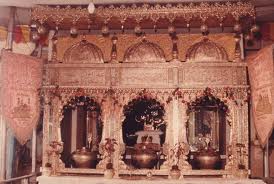 Karachi: Nasabi terrorists of ANP torch the Alam-e-Mola Abbas (as)