They offered fateha at the grave of father of the nation Mohammad Ali Jinnah, founder of Pakistan.

Meanwhile, Allama Ahmed Iqbal also spoke to the media on the occasion.

Particularly, he paid tributes to Mr. Jinnah for his dynamic leader and unwavering struggle to win Pakistan’s independence.

Moreover, he announced observance of black day on August 15 to condemn Indian atrocities in occupied Kashmir. 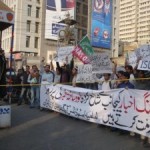