The US occupation forces brought in a convoy of vehicles carrying logistical materials and military equipment to al-Rmeilan area in Hasaka countryside, coming from Iraqi territory through illegal al-Waleed crossing.

Local sources in al-Suwaidiyah village, in the far northeastern countryside of Hasaka, told SANA reporter that the US occupation forces brought today a convoy consisting of 44 vehicles, including trucks, refrigerators, and tankers carrying new cars, and headed for Rmeilan oil region, east of al-Qamishli city, about / 68 / km.

In the framework of looting the Syrian oil, local sources added that 115 tanks entered Tal Adas oil fields on Thursday and it is expected to fill them with the Syrian oil to return to Iraqi lands via illegal al-Walid crossing in Al-Yarubiyah.

Clashes erupt between militants and government troops in Syria’s Aleppo 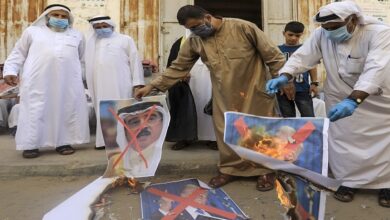