Leader of the Islamic Revolution Ayatollah Seyyed Ali Khamenei has warned against fueling disputes and creating clamor in the country, stressing the importance of unity.

â€œOne of the most important and necessary matters for the continuation the perfective and the progressive movement of the Islamic Â Revolution is to avoid fueling the atmosphere of dispute, chaos and clamor in society and all political and ideological currents and organs must be practically committed to safeguarding unity,â€ the Leader said in a Monday meeting with the commanders of the Islamic Revolution Guards Corps (IRGC).

â€œDo those who fuel such disputes not see the contentment of foreign propaganda machines and their [political] analyses? The happiness of the enemy shows that this issue is a weakness [for us] and therefore it must be stopped.â€

The Leader stressed the necessity of safeguarding unity in society and said, â€œAll [Iranians] must stand against the enemy like an impenetrable wall and in a united front.â€

The Leader added that safeguarding the Revolution means â€œmaintaining the progressive and revolutionary movement of the Islamic Establishment.â€

Referring to the recent developments in the Middle East and North Africa, Ayatollah Khamenei said, â€œThe next wave of the movement, which has now begun in the region, will be in countries far beyond the region, and such an incident will [definitely] take place.â€ 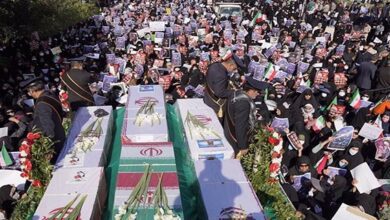