Iranian President Mahmoud Ahmadinejad on Wednesday called the United States a global dictator and lashed out at Israel after arriving in Nigeria to meet fellow Muslim leaders at a summit.

The Iranian leader said “the occupiers … should dismantle their evil forces from the face of earth.” Ahmadinejad’s appearance in the West African country, where Muslims make up an estimated half of the 150 million population, drew a rapturous welcome from the crowd, which chanted “Nigerians support Iran.”

“We are going to put an end to the suffering of the people of Palestine,” he said. “The Palestinian refugees will return to their homeland … soon we are going to celebrate our victory.”

Ahmadinejad was in Nigeria to attend a one-day summit of the Developing Eight (D-8) group on Thursday in Abuja. The Istanbul-based D-8 groups Bangladesh, Egypt, Indonesia, Iran, Malaysia, Nigeria, Pakistan and Turkey, with a total population of 930 million people. 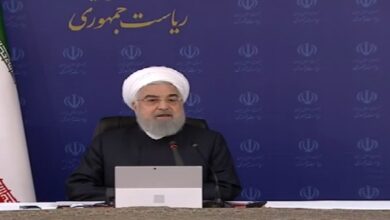 Mosques across Iran would reopen with the health protocols: Rouhani

Bahram Qassemi: US is mad because Hezbollah resists against its plots for region