During his Friday prayer sermon delivered to a large and fervent crowd of believers in Qom’s Holy Shrine of Lady Fatimah al-Ma’sumah (S), Hujjat al-Islam Sayyed Mohammad Sa’idi referred to the ongoing negotiations over Iran’s disputed nuclear program and said that the United States’ behaviour during the final days of the negotiations has been nasty and distressing.

“This undiplomatic behaviour increases the Iranian peoples’ hatred towards the Americans. The Americans are strongly against the beliefs and values of the Islamic Republic of Iran and the nuclear issue and human rights issues are just excuses,” he said.

He explained that Iran’s enmity with the US is based on Islamic belief and upon the Holy Quran. The Quran says that the enemies of Islam and the Quran are constantly at war with Muslims and are always hostile toward them. The hostility of the Islamic Republic of Iran with the US is not based on emotions, but it based on faith. “According to the Quran and the tradition of the Prophet Muhammad (S), we should deal with the enemies of Islam severely,” he said.

Slogan “Down with America” not to be forgotten

Hujjat al-Islam Sa’idi said that as long as the US is involved in sedition and crimes, especially in Muslim countries, the slogan “Down with America” will not be forgotten by Iranians. “Due to the hostile positions taken by the US against Iran, the Iranian nation will never be prepared to compromise and build a relationship with the US,” he said.

His Eminence praised Iran’s nuclear negotiating team because of its resistance to the excesses brought forward by the US, saying: “We are thankful to the negotiating team which respects the red lines of the Islamic Republic of Iran and we announce that they defend the strength, power, honour and dignity of the Iranian nation. This is the message of the Quran to you.”

Return to a so-called “promised land” an absurd belief

Hujjat al-Islam Sa’idi noted how Israel was formed, stressing that the return to a so-called “promised land” is an absurd belief and it is upon this belief that the foundation of the Zionist regime was laid. “Some Islamic countries have also had a role in this treachery and the illegitimate state of was gradually formed,” he said.

“By the late Imam Khomeini’s vision and foresight, he named the last Friday of Ramadan as International al-Quds Day and as they have done in previous years, the oppressed nations years will display their holy anger against Zionism and will not retreat until they eliminate this evil regime from the world,” he emphasized.

Al-Quds Day reveal the traitors of the Muslim world

His Eminence explained that al-Quds Day rallies pull the veils off the faces of the traitors of the Muslim world, such as the House of Saud. “The Saudis unrelenting attacks on Yemen show that they are not the ‘Servants of the Two Holy Shrines’ but rather, they have betrayed Muslims. Thus, the slogan of ‘Death to the House of Saud’ also resonates from the al-Quds Day rallies.”

Every year on International al-Quds Day millions of people around the world, Muslims and non-Muslims alike, stage rallies on this day to voice their support for the Palestinian nation and repeat their call for an end to the Zionist regime’s atrocities and its occupation of the Palestinian territories. 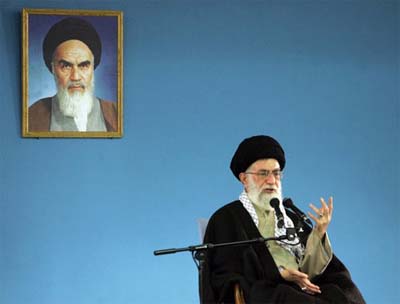 Ayatullah Khamenei Warns: Thunder Will Fall on Israel in Case of Attack