The commander-in-chief of the IRGC says that Iran will certainly turn the scene of recent sedition that enemies created in Iran into the graveyard of enemies.

Major General Hossein Salami made the remarks on Sunday at the gathering of 15,000 Sistan and Baluchestan Basij members in the city of Zahedan.

Praising the people of Sistan and Baluchestan province for their spirit of religiosity and loyalty, the IRGC commander pointed to the outstanding unity and friendship between Shia and Sunni Muslims in the province.

He also appreciated the Basij members’ sacrifices since the victory of the Islamic Establishment until now, as well as their important role in defending the people of Syria, Iraq, Lebanon, and Yemen against the US-led takfiri terrorists.

Referring to the recent riots in Iran, Salami said that several countries including the US, the Uk, the Israeli regime, Germany, France, and Saudi Arabia are trying to create tension in Iran with their divisive media. “But this nation is fully aware,” he added.

Saying that the enemies of Iran are living in delusion, the IRGC chief added, “The enemy is the first to be defeated by his media. The enemy does not know that this land and the (Islamic) revolution are strong.”

“Be sure that the Zionist regime will collapse, but this [Islamic] revolution will not be damaged,” he stressed.

Regional popular movements will be victorious

World Mourns Anniversary of Martyrdom of Imam Reza (AS) 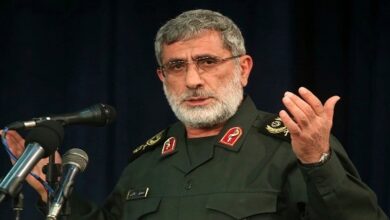 General Qaani Calls on Zionists to Return to their Houses in US, Europe