Iran says its response to a resolution passed by the International Atomic Energy Agency (IAEA) against Tehran’s nuclear energy program was “decisive and appropriate.”

Speaking at a weekly press conference on Monday, spokesman for the Iranian Foreign Ministry Saeed Khatibzadeh said the resolution has created obstacles on the path of implementing the Iran nuclear agreement, officially called the Joint Comprehensive Plan of Action (JCPOA).

On Wednesday, the IAEA Board of Governors adopted a resolution proposed by the United States and the three European parties to the 2015 Iran deal – Britain, France, and Germany – which accused Iran of not cooperating with the UN nuclear watchdog.

The trigger for the resolution was a report issued by the IAEA after its Director General Rafael Grossi made a controversial visit to Israel and met the regime’s authorities late last month.

The agency has been on the receiving end of documents supplied by Israel about Iran’s nuclear program, which Tehran has rejected as fake and fabricated provided by members of the anti-Iran terrorist Mujahedin-e-Khalq Organization (MKO).

“We could not leave the IAEA’s political and non-technical action unanswered,” Khatibzadeh said, referring to Iran’s further reduction of its nuclear obligations under the 2015 Iran deal as a response to the resolution. “Our response was decisive and appropriate.”

On Thursday, Iran announced it had begun injecting uranium gas into advanced centrifuges and disconnected some of the UN nuclear agency’s cameras monitoring its sites outside the Safeguards Agreement.

“We have terminated the operations of a number of the agency’s cameras functioning outside the Safeguards [Agreements], and tomorrow we will terminate the operations of the rest, which are 17 to 18 in total,” Mohammad Eslami, Atomic Energy Organization of Iran (AEOI), declared.

The Iranian spokesman went on to say that “the abrupt change in the IAEA chief’s tone, his manner of negotiations, and his discourse when he addressed the European Parliament clearly shows that he was acting on the orders of an outside player.”

Khatibzadeh also touched on the Vienna talks to revive the Iran deal, saying an agreement is within reach if the United States abandons delusions and fulfills its commitments.

Since April last year, the Iranian negotiating team has been involved in marathon talks with the other remaining parties to the JCPOA – Britain, France, Germany, China, and Russia – with the aim of bringing the US back into the deal and destroying its sanctions regime against Tehran.

Under former president Donald Trump, the United States pulled out of the landmark agreement and instigated what it described as the “maximum pressure” campaign of sanctions against the Islamic Republic to reach a “better deal” compared to the JCPOA.

Meanwhile, the Vienna talks have been on hold since March as Washington insists on its refusal to undo its past wrongs through measures such as removing Iran’s Islamic Revolution Guards Corps (IRGC) from its list of foreign terrorist organizations.

Khatibzadeh also criticized a recent trip by Grossi to the Israeli-occupied territories, stating that the move seriously harmed the credibility of the UN nuclear watchdog.

He said despite the fact that the IAEA is required to remain impartial, the nuclear body’s director general traveled to Israel, which has not accepted any nuclear non-proliferation treaty.

“It is unfortunate that the director general of the International Atomic Energy Agency has granted the unlawful regime of Israel permission to make a mockery of the international organization through its agents, and erode its credibility,” he noted.

He said that Grossi has “made a trip to a wrong place and at the wrong time” and that he has “met with wrong people and dealt a heavy blow to the agency’s credibility.”

“These actions have discredited the achievements of international organizations. Under the Statute of the IAEA, its chief is obligated to ensure the independence and impartiality of the organization,” he added.

‘Iranian diplomat must be released unconditionally’

Khatibzadeh also condemned the imprisonment of Assadollah Assadi, an Iranian diplomat detained in Belgium on false terror-related charges, and called for his immediate release.

The spokesman slammed Assadi’s detention as a gross violation of the Vienna Convention on Diplomatic Relations of 1961.

“By the order of the president [Ebrahim Raeisi], an international legal complaint was lodged, demanding the release of Mr. Assadi. The Belgian government has violated the convention and developed a dangerous contrivance. Mr. Assadi must be released unconditionally and his dignity restored,” Khatibzadeh said.

In June 2018, Belgian authorities said that the country’s police had intercepted a car carrying homemade explosives and a detonation device, claiming that Assadi had handed the materials to two people in Belgium earlier.

Assadi was later apprehended in Germany and told that he could not apply his diplomatic immunity.

A Belgian court then sentenced the diplomat, who served as the third counselor at Iran’s Embassy in Vienna, to 20 years in prison after accusing him of plotting an alleged attack against the MKO terrorist group. 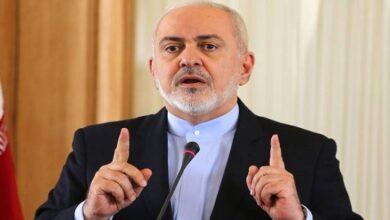