In yet another move against Iran, the US House Foreign Affairs Committee has passed a bill to restrict the proliferation of Iran’s military drones. This is while negotiations over the removal of anti-Iran sanctions are in progress in the Austrian capital Vienna.

Tehran has time and again proven that its military prowess is purely defensive. So, how can Washington’s move be justified when the US sells bombs and drones to other countries that use them in unjust wars to kill civilians?

A bipartisan group of leading members of the US House Committee on Foreign Affairs have just passed a bill aimed at restricting Iran’s defensive military prowess.

The Stop Iranian Drones Act bans the supply, sale, or transfer, of military drones to or from Iran under US law. The bill addresses, what the US claims to be, the growing threat of Iran’s unmanned aerial vehicle programme.

However, despite attaining self sufficiency in the arms industry, making great progress in developing and manufacturing a broad range of military equipment in recent years, Iran has time and again proven that its military capabilities are purely defensive in the face of moves by the US and its regional allies, who have been fomenting chaos and tension in the region.

Last month the Iranian army intercepted two US unmanned aerial vehicles, which had penetrated Iranian airspace in an area where Iran was holding massive drills.

They were sent on their way with a stern warning to stay away from the zone.

The ban imposed on the Iranian military drones comes amid ongoing talks over the removal of anti Iran Sanctions between Tehran and the signatories to the 2015 nuclear deal in Vienna.

The US has long been trying to tie Iran’s military capabilities to the talks, however, the Islamic Republic has repeatedly underscored that its defensive capabilities will never be subject to negotiations.

The US also baselessly accuses Iran of conducting drone attacks in West Asia, while Washington has well documented blood on its hands, having killed thousands upon thousands of innocent civilians by conducting their own hypocritical drone and air strikes in the region.

It is should be noted that the United States is the leading exporter of arms in the world and that Washington attempts to restrict Iran’s defensive capabilities while at the same time it sells bombs, drones and arms to countries like Saudi Arabia that use them in unjust wars, such as the war in Yemen, to kill innocent civilians.

In fact, half of all US arms transfers between 2016 and 2020 went to the West Asia region, particularly Saudi Arabia, leading to more instability and chaos.

The US is also guilty of civilian killings in many war theatres, like in Afghanistan, Iraq and Syria, from drone strikes to other military action rights groups have accused Washington of hiding the real number of civilian casualties and the media do a poor job of reporting “collateral damage”.

Based on the US military’s own assertion, Washington has conducted almost one hundred thousand drone and air strikes in the West Asia region in the past twenty years.

According to analysis published by the civilian harm monitoring group, Air Wars, the US strikes have killed at least 22,000 civilians across various theatres, including Afghanistan, Iraq, Syria, Somalia, Libya, Yemen and Pakistan since 2001.

The group says the number of casualties and fatalities could in all likelihood be as high as 48,000.

The US assassinated one of Iran’s top generals, Qassem Soleimani, together with Iraqi PMU Commander Abu Mahdi Al Muhandas, in a drone strike near Baghdad International Airport on January 3rd 2020.

The two were iconic figures in the fight against the Daesh Takfiri terrorist group that emerged amid the mayhem resulting from the US invasion of Iraq in 2003.

High ranking US diplomats have previously admitted that Washington is responsible for the foundation of the Daesh terrorist group.

Just days after the dastardly assassination the IRGC launched a volley of missiles at a major military base housing American forces in Iraq.

Iran denounced the assassination as an act of state terrorism and vowed to bring about the end of the American presence in the region as the ultimate act of revenge.

Well, clearly if one was going to have a completely honest and neutral international legal system; no country can stand above it. But we don’t have that and in fact, we have a system where the people who’ve got the arms and the money, make the decisions.

So obviously, if we were to say that any time a country used a drone and killed other civilians, there was going to be sanctions.

Clearly, those countries that have drones, in particular, this country, would have to be sanctioned, but that’s simply not going to happen. 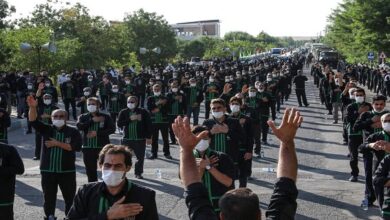