Iran’s President Ebrahim Raeisi says despite what enemies of the two nations intend, Iran and Iraq will expand their relations at all levels with every passing day.

Raeisi made the remarks while speaking in a joint press conference with the visiting Iraqi Prime Minister Mustafa al-Kadhimi in Tehran on Sunday.

“Despite what enemies want, relations between Iran and Iraq will expand every day… [because] development of bilateral relations can boost the role that Tehran and Baghdad play in regional and global relations, and will strengthen international relations as well,” Iran’s chief executive said.

Referring to the “good news” by the Iraqi premier about the waiver of travel visas for the two countries, Raeisi said despite special conditions that the two countries and the entire world are facing due to the coronavirus pandemic, Kadhimi has promised to increase the number of Iranian pilgrims who want to head to the holy Iraqi city of Karbala to commemorate Arba’een, the 40th day after the martyrdom anniversary of Imam Hussein (AS), the third Shia Imam.

“Mr. al-Kadhimi told us about the waiver of visa between the two countries and this was a good news,” Raeisi said.

Last year, Iraq banned foreign pilgrims traveling to the country for Arba’een in light of the coronavirus pandemic.

Every year on Arba’een, millions of people from around the world flock to Karbala. Large groups of mourners travel on foot toward the holy city to take part in the largest annual Islamic gathering on earth. The ceremony falls on September 27 this year.

Elsewhere in the presser, Raeisi said, “Iran and Iraq are determined to develop the rail corridor, which connects [Iran’s southwestern city of] Shalamcheh to [Iraqi city of] Basra. This issue is to be resolve rapidly through follow-ups by relevant ministers in Iran and Iraq.”

The Iraqi prime minister, for his part, lauded Iran’s support for his country and nation in the fight against the Daesh Takfiri terrorist group, emphasizing that the Iraqi government and nation will never forget Iran’s support in this regard.

He emphasized that Iraq pursues a fixed and stable position vis-à-vis Iran, reaffirming his country’s constant support for the Iranian people and government in all fields.

He noted that he held talks with the Iranian president on ways to expand mutual relations, saying that both Tehran and Baghdad are resolute on the development of ties to serve the two nations’ interests.

Heading a high-ranking political and economic delegation, the Iraqi prime minister arrived in Tehran on Sunday to hold talks about bilateral relations, issues of mutual interest as well as regional and international developments in meetings with Iranian officials.

In a meeting with his Iraqi counterpart Barham Salih in Tehran in August, the Iranian president said the Islamic Republic wants a powerful and strong Iraq and is determined to further improve relations with Baghdad.

Raeisi added that every step leading to Iraq’s strength and preventing foreign interference would contribute to the Arab country’s progress. 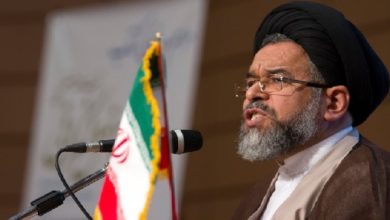 Quds Day to be observed in 80 countries, over 770 Iranian cities: Iran official