An informed Iranian source says the country will give a strong and crushing response to any measure taken against its national interests and security, blaming Britain and the US for the consequences of such moves against Tehran.

“Although the Islamic Republic of Iran considers threats posed by the officials of Western countries and the Zionist regime to be mostly of propaganda value, any measure against Iran’s interests and national security will be met with strong and crushing response, with Washington and London being directly responsible for consequences of such moves,” the source, who spoke on condition of anonymity with an Iranian news outlet close to the Supreme National Security Council, said on Monday.

The Iranian source’s remarks came after the United States and the United Kingdom joined Israel in accusing Iran of orchestrating Thursday’s attack on an Israeli tanker off the coast of Oman, despite Tehran’s firm denial.

“Upon review of the available information, we are confident that Iran conducted this attack, which killed two innocent people, using one-way explosive UAVs,” US Secretary of State Antony Blinken said in a statement Sunday.

British Foreign Secretary Dominic Raab also reflected on the matter, saying that the “unlawful and callous” attack had highly likely been carried out by Iran using one or more drones.

Later on, Israeli newspaper Kan reported on Sunday that Tel Aviv has received a “green light” from Washington and London to carry out a “response” to the attack.

According to Iran’s Nournews news agency, the accusations against Iran come despite the fact that no evidence or a single proof has so far been provided to prove Iran’s role in this incident.

“Although the statements made by Blinken and Raab are in line with their Iranophobia project to impose their excessive demands in negotiations on [the revival of Iran’s] nuclear deal, they are also indicative of West’s extreme weakness in the area of intelligence and are aimed at creating a new crisis to help them meet their political goals,” it added.

The media report noted that Western countries’ false expression of concern about undermining of maritime security comes despite the fact that both the United States and the UK have many cases of piracy on their records.

“They have also turned a blind eye to the Zionist regime’s acts of terror against other countries and its frequent acts of mischief aimed at making shipping lines unsafe,” the report noted.

Iran’s Foreign Ministry spokesman Saeed Khatibzadeh on Sunday said recent accusations leveled against Tehran by Israel and the United States about attacking an Israeli-owned merchant ship in the Sea of Oman are “childish” and influenced by the Zionist lobby in the United States.

“The illegitimate Zionist entity must stop leveling baseless charges against Iran. This is not the first time that this regime brings up such accusations [against Tehran],” he added.

Grand Ayatollah Makarem outraged over depiction of Shia saints in “Hussein, Who Said No” film 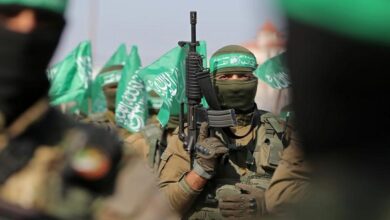