Courageous forces of IRGC have always proved that no power can defeat them as they’ve always stood against global arrogance, Chief of Staff of Iranian Armed Forces said, felicitating IRGC forces on its national day.

After passing 43 years from the establishment of IRGC, today, it is known to everyone that not only the courageous IRGC forces have always stood against arrogant powers of the world, but also they have been present in all scenes of defending the achievements and values of the Islamic movement, Bagheri said.

Relying on God and with the support of the heroic nation of Iran, IRGC forces have always proved that no power can defeat these beloved forces, he added.

He went on to say that today, IRGC has both the power of aggression and the power of resistance; it means that they can attack the enemy’s centers of threat in any size, with any scale, and in any intensity.

Seizure of British Royal Navy warship in Iranian waters, downing the spy drone of the terrorist regime of United States, and the capacity to destroy the Zionist regime reveal the fact that these are not illusions, but a fact that has been realized by the will and faith of the Revolutionary Guards, he noted.

“I call on all IRGC forces to neutralize the psychological operations and media war of the enemies, strengthen the defense our capacities, upgrade the deterrent power of the county in the field and missile programs,” he stressed. 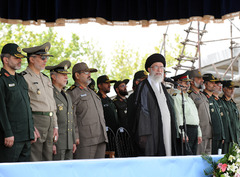