The local Bahraini Akhbar Al-Khaleej newspaper reported that Bahrain’s Minister of Foreign Affairs, Khalid bin Ahmad Al Khalifa, during his meeting with the Members of Parliament, said that “the GCC states expressed their strong reservation regarding the letter of the Iranian president Hassan Rouhani to Kuwait’s Prince concerning the Iranian-Gulf reconciliation. The Gulf states stressed that it is important that Iran does not interfere in Gulf and Arab affairs, especially in Bahraini internal affairs, nor disrupt the region’s peace and stability, and put an end to the occupation of the Emirati islands.”

“The minister affirmed to the MPs that the US State Department’s latest statement (demanding the release of Sheikh Ali Salman) is an interference in the internal affairs of Bahrain and that it doubts the integrity of the judiciary,” added the newspaper, noting that “building relations between Iran and the US should be based on a balance in the region.”

It further stated that the minister addressed during his meeting with MPS “the decisions issued by the consultative meeting of the GCC Supreme Council that was recently held in Jeddah, which included the establishment of an economic and development committee, aimed at enhancing economic cooperation and representing the beginning of a Gulf union.” 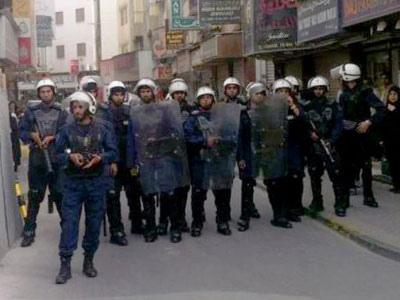