The administration of outgoing US President Donald Trump has designated Bahraini opposition group Saraya al-Mukhtar as a “terrorist” organization, months after the Manama regime agreed to a Washington-brokered normalization with Israel.

In a statement released on Tuesday, US Secretary of State Mike Pompeo said his office had blacklisted the group as “a Specially Designated Global Terrorist,” claiming that it was “posing a significant risk of committing acts of terrorism that threaten the national security and foreign policy of the United States.”

“The group has plotted attacks against US personnel in Bahrain and has offered cash rewards for the assassination of Bahraini officials,” Pompeo further claimed.

The designation freezes any of the group’s US assets and generally bars Americans from dealing with it.

Iran has not commented on the claims so far.

The Bahraini government welcomed the US blacklisting of Saraya al-Mukhtar.

The Bahraini Foreign Ministry said in a statement that it “commends” what it called “the relentless efforts undertaken by the United States of America in combatting all extremist terrorist organizations.”

Bahraini courts have already sentenced suspects allegedly linked to Saraya al-Mukhtar to years in prison and revoked their citizenship.

Several Bahraini groups have faced accusations of ties to Iran since 2011, when an uprising began in the kingdom against the ruling Al Khalifah regime. Tehran has, however, dismissed such allegations as false.

Analysts see the blacklisting as an American reward to Manama, months after it reached a US-brokered normalization deal with the Israeli regime.

The agreement sparked several angry street protests in Bahrain, with the participants slamming the regime in Manama for turning a deaf ear to the nation’s calls against making peace with the occupiers of Palestine.

Bahrainis rally in their hundreds for a sixth straight night against the ruling regime’s recent United States-enabled normalization with Israel.

In addition to Bahrain, the UAE, Sudan and Morocco have also reached similar agreements with Israel.

Joe Macaron, a fellow at the Arab Center Washington DC, told the Middle East Eye (MEE) news portal that “the activities of Saraya al-Mukhtar have significantly diminished since 2018 but the Trump administration is standing by those Arab allies who normalized with Israel.”

“While Morocco got US recognition of its sovereignty over Western Sahara and Sudan was delisted as a state sponsor of terrorism, the Trump administration is showing support for Bahrain in a designation that has no real impact whatsoever,” he added.

Bahrain — home to the US Navy’s Fifth Fleet — has seen anti-regime protest rallies since the onset of the uprising. The major demand has been the ouster of the Al Khalifah dynasty and the establishment of a just and conclusive system representing all Bahraini nationals.

In an attempt to stifle those calls, the Manama regime has been pressing ahead with a heavy-handed crackdown against the protesters and persecution of human rights campaigners and political dissidents. 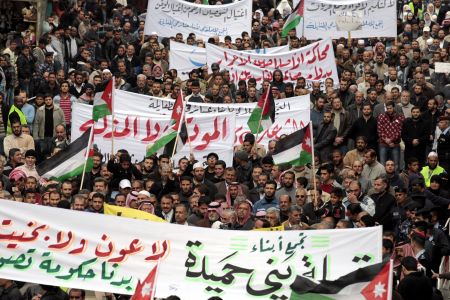