The Takfiri ISIL terrorist group has released a new gruesome video showing the execution of ten Afghan tribesmen, allegedly for cooperating with the Taliban militant group and Pakistan’s intelligence agency.

The footage, claimed to be filmed in the eastern Afghan province of Nangarhar, was released on Monday by the terror group’s members in a region, which the ISIL calls Wilayat Khorasan, comprised of Afghanistan, Pakistan, and nearby areas.

The tribesmen were accused of cooperating with the Taliban and Pakistan’s Inter-Services Intelligence (ISI) agency, and giving them information about ISIL members.

The video shows the notorious terrorists using a new way to kill their victims by digging holes in the ground and planting explosive materials in them. The victims are then forced to sit on the holes before the materials are detonated using a remote control.

Mostly active in Iraq and Libya, the ISIL has even managed to expand its territory into other countries, including Libya, Egypt and Afghanistan.

The Takfiri group uses a campaign of terror that involves gruesome methods such as videotaped beheadings, summary executions, and other methods to kill. 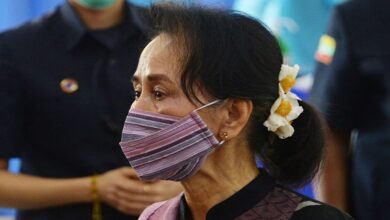