China says it would be happy to participate in negotiations on arms control with the United States if Washington was willing to reduce its nuclear arsenal to the same level as Beijing.

“I can assure you that if the US says that they are ready to come down to the Chinese [nuclear arsenal] level, China would be happy to participate the next day,” Fu Cong, director general of the Arms Control Department at the Chinese Foreign Ministry, said in a news conference in Beijing on Wednesday.

“But actually, we know that that’s not going to happen. We know the US policy. And we are more realistic, frankly speaking,” Fu added.

Approximately 91 percent of all nuclear warheads are owned by the United States and Russia, each having around 4,000 in their military stockpiles.

It is estimated that China has a stockpile of around 320 nuclear warheads.

Fu said Beijing had no interest in joining trilateral negotiations that involve both the US and Russia.

The US has been calling on China to join trilateral negotiations to extend a flagship nuclear arms treaty between Washington and Moscow that is due to expire in February next year.

China has refused to participate in the US-Russia talks but said it would take part in international nuclear disarmament efforts.

The negotiations in question were on the replacement of New START, a nuclear arms treaty between the US and Russia that has nothing to do with China. By inviting China and anticipating its refusal to participate, Washington had been planning to portray the Chinese government as reluctant to take part in any arms control treaty.

Washington itself, meanwhile, has unilaterally withdrawn from treaty after treaty under US President Donald Trump. 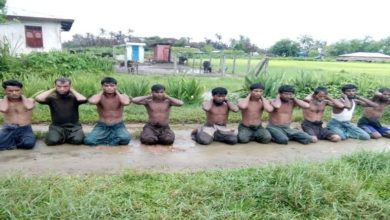