Clashes have erupted in the Indian capital, New Delhi, between protesters during rival rallies over a citizenship law seen as anti-Muslim, resulting in the deaths of at least seven people, hours before US President Donald Trump arrived in the city on his first state visit.

Police fired tear gas and used smoke grenades to separate the rival protesters who were hurling rocks at each other in New Delhi on Monday.

“Some of the people brought in had gunshot wounds,” Rajesh Kalra, a medical official at the Guru Teg Bahadur Hospital, told Reuters on Tuesday.

It was not clear who fired the shots. Police said an officer was among those killed in the clashes.

The protests came hours before Trump’s maiden visit to New Delhi, where he was scheduled to hold talks with Indian Prime Minister Narendra Modi on Tuesday at a venue located a few miles away from where the clashes took place.

There were reports of new clashes in the city on Tuesday, with schools remaining shut in some areas, and at least five metro stations were closed.

India has been engulfed by protests since early December last year, when the country’s parliament passed the citizenship act, which is seen as discriminatory toward Muslims. Under the law, migrants from Bangladesh, Pakistan, and Afghanistan will be allowed to claim Indian citizenship — but not if they are Muslims.

Trump’s first official visit to India started with a brief stopover in Ahmedabad, the hometown of Modi, where the US president addressed a huge cricket stadium. Trump and his wife Melania later toured the Taj Mahal monument in Agra. He arrived in New Delhi late Monday and the official talks are scheduled for Tuesday.

The timing of the deadly protests has given rise to speculation about whether the US president will raise the issue of religious freedom in his conversations with Modi as promised by US administration officials prior to the visit.

This is a highly sensitive issue both for Modi’s government accused of encouraging religious intolerance and seeking to transform India into a Hindu state, and for Trump who has been facing accusations of religious bigotry and racism at home for his travel ban on several Muslim-majority countries. 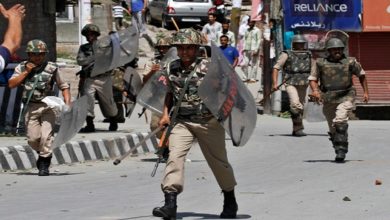 At least 10 killed in central Afghanistan by Taliban attack