A fresh round of protests has broken out against an anti-Muslim citizenship law in India, amid evidence of excessive force used by police to suppress public outcry.

The Citizenship Amendment Bill (CAB), which was passed by Hindu-nationalist Prime Minister Narendra Modi’s government last week, aims to purportedly save religious minorities from persecution in neighboring Bangladesh, Pakistan, and Afghanistan by offering them an easy path to Indian citizenship.

Critics say Modi has designed the discriminatory law explicitly to exclude Muslims from the possibility of acquiring refugee status in India and, eventually, citizenship.

India’s 200 million Muslims view the measure as the government’s first step toward making them second-class citizens, and protests over the law have since been ongoing in the South Asian country.

The new protests were staged in the eastern city of Kolkata in India’s West Bengal State as well as in the southernmost state of Kerala, local sources said on Tuesday, with several other rallies planned in the capital, New Delhi, later in the day.

Authorities imposed internet blackouts and used force to shut down rallies and sit-ins across several states to quell the unrest.

Police said ten people had been arrested for rioting and mob violence on Tuesday.

Kolkata was also the scene of mass demonstrations on Monday as thousands of protesters took to the streets in a march led by West Bengal Chief Minister Mamata Banerjee, a fierce critic of Modi.

The new round of rallies took place as petitions calling for a probe into allegations of police brutality at two universities in northern India were heard by the Supreme Court on Tuesday.

The university’s vice-chancellor said 200 people were injured but police put the number of the injured at 39 students and 30 officers, one of them critically.

Opposition Congress party leaders, led by Priyanka Gandhi Vadra, also held a sit-in at the India Gate in New Delhi on Monday in a show of solidarity with the protesting students.

In a video that went viral after the clashes in the university, a group of unarmed young women are seen trying to protect a male friend from a group of Indian police officers hitting him brutally with poles.

The officers are seen in the footage dragging the man out of a house and repeatedly lifting their sticks high above their heads before bringing them down with as much force as possible.

The women, all in their early 20s and students at JMI, practically acted as human shields against the officers.

Human Rights Watch has called for police to show restraint in confronting the unrest. 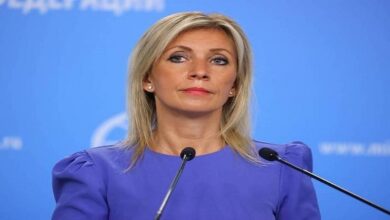 Moscow Comments on US Piracy Bid against Iranian Oil Tanker