At least 20 people have been killed and nearly 100 others wounded after a Taliban bomb attack targeted a building of the intelligence services in southern Afghanistan, officials say.

The bomb attack occurred in the city of Qalat, the capital of Zabul Province, on Thursday morning, and according to Atta Jan Haqbayan, the head of Zabul’s provincial council, it targeted the building of the National Directorate of Security (NDS) there.

The official said that the huge blast also wounded 95 people and warned that “the number of casualties may rise as rescue teams and people are still searching the bodies under the rubble.”

Reuters also quoted an unnamed senior Defense Ministry official in Kabul as saying that the militants sought to target a training base for NDS but parked the explosives-laden vehicle outside a hospital gate nearby.

Reports said that several women, children, health workers, and patients in the hospital were critically wounded.

Rahmatullah Yarmal, Zabul’s governor, said that the regional hospital of Zabul was destroyed in the attack.

“Ambulances have also been called from Kandahar city to transfer the wounded to hospitals in Kandahar province. Most of the victims have been taken to private hospitals,” Afghanistan’s Tolo News television channel quoted local officials as saying.

The Taliban militant group, which launched a fresh string of deadly strikes across the war-torn country this week, claimed the Thursday bomb attack, saying that it had targeted the NDS office.

One of those attacks hit an election campaign rally in the city of Charikar, the provincial capital of Parwan, and killed at least 24 people. The event was attended by Afghan President Ashraf Ghani but he was unhurt.

The other one killed at least 22 people after a bomb blast hit the center of the capital, Kabul.

The US and its allies invaded Afghanistan to remove the Taliban regime. Some 18 years on, Washington has been seeking truce with the militant group.

Separately on Thursday, US forces providing air cover for Afghan security forces during an operation killed at least 30 civilians and wounded 40 others in eastern Afghanistan, government officials said.

The airstrike had been supposed to target a position held by members of the Takfiri Daesh terrorist group in Nangarhar Province but accidentally hit a group of workers, mainly daily wage earners, who had gathered near their tent after harvesting pine nuts in a field in Khogyani district in the volatile province.

“The workers had lit a bonfire and were sitting together when a drone targeted them,” said Malik Rahat Gul.

Attaullah Khogyani, a spokesman for the provincial governor, confirmed the airstrike and said that Kabul was “investigating the incident.”

According to Sohrab Qaderi, a provincial council member, the attack was conducted by a combat drone.

Blair washes his hands of responsibility for Iraq crisis 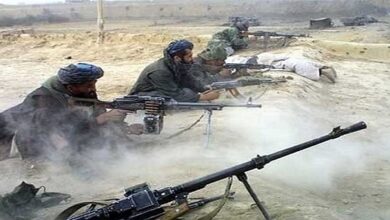