18 US Code § 2331 defines a terrorist organization as follows:

The term refers to “activities that involve violent acts or acts dangerous to human life…(that) intimidate or coerce a civilian population…influence the policy of a government by intimidation or coercion…(and engage in) mass destruction.

The US Army Operational Concept for Terrorism (TRADOC Pamphlet No. 525-37, 1984) called terrorism “the calculated use of violence or threat of violence to attain goals that are political, religious, or ideological in nature…through intimidation, coercion, or instilling fear.”

In his “Politics and the English Language,” Orwell explained that “political speech and writing…defen(d) the indefensible.(D)efenseless villages are bombarded from the air (and) this is called ‘pacification.’ ”

“(W)ar on terrorism (is) war of terrorism.” Historian Howard Zinn said “(h)ow can you make war on terrorism, if war is terrorism…Governments are terrorists on an enormously large scale.”

Scholar/activist Eqbal Ahmad called terrorism “coercive violence…that is used illegally (and) extra-constitutionally” – whether by governments, groups or individuals, state terrorism most destructive of all, namely wars of aggression and other hostile actions by one nation against others.

Separately, Ahmad asked: “Who will define the parameters of terrorism, or decide where terrorists lurk? Why, none other than the United States, which can from the rooftops of the world set out its claim to be sheriff, judge and hangman, all at one and the same time.”

What better definition of terrorism than the above. Clearly and indisputably, the US, its government and agencies, especially its military, is an unparalleled terrorist organization under the above definitions.

It consistently and repeatedly flouts international, constitutional, and its own statute laws, operating by its own rules of engagement worldwide, doing whatever it pleases on the phony pretexts of protecting national security, humanitarian intervention, responsibility to protect, and/or democracy building. The US tolerates it nowhere, especially not at home.

“I am announcing our intent to designate the Islamic Revolutionary Guard Corps (IRGC), including its Qods Force (sic), as a foreign terrorist organization (FTO). This designation will take effect one week from today,” adding:

“This is the first time that the United States has designated a part of another government as an FTO.”

Fact: Iran hasn’t attacked another country in centuries, threatening none now. The US wages permanent war on humanity, raping and destroying one country after another, notably since the 1950s, especially post-9/11.

US inner cities are battlegrounds nationwide, killer cops lethally shooting and otherwise abusing people of color unaccountably, Black Americans harmed most of all, along with unwanted aliens and Muslims from the wrong countries.

In falsely designating Iran’s IRGC (a branch of its military) an FTO, the Trump regime acted at the behest of Israel, aiming to give Netanyahu a further boost ahead of today’s elections, the prime minister tweeting:

“Thank you, my dear friend, President Donald Trump, for answering another one of my important requests.”

Longstanding US hostility toward Iran is all about its sovereign independence, its unwillingness to subordinate its sovereignty to US interests, opposition to Washington’s war on humanity, its support for fundamental Palestinian rights, as well as being Israel’s main regional rival it wants eliminated.

Ahead of Pompeo’s announcement, the State Department lied, claiming the IRGC “regularly threatens freedom of navigation in the Persian Gulf (sic) while its Aerospace Force directs the country’s ballistic missile program in defiance of Security Council resolutions (sic).”

It lied saying Tehran supports regional terrorist groups (sic), adding “(s)ince 1979, Iran has made it a policy of state to actively direct, facilitate, and carry out terrorist activity globally (sic)” – a US, NATO, Israeli specialty, polar opposite how the Islamic Republic operates.

The Islamic Republic’s military, its IRGC, and legitimate weapons are solely for defense, solely involved in preserving and protecting Iran from hostile external or internal attacks and threats, its actions strictly defensive. Its involvement in Syria is advisory, aiding Damascus combat US-supported terrorists.

In response to the Trump regime’s action, Iran’s Supreme National Security Council (SNSC) designated the US Central Command (CENTCOM) and related forces as a terrorist organization.

It labeled the US government a “supporter of terrorism.” The SNSC said “(t)he Islamic Republic of Iran regards (the) baseless (US) move as a major threat to regional and international peace and security and a blatant violation of the compelling rules of international law and the United Nations Charter.”

The Trump regime “will be responsible for dangerous consequences of this adventurist measure.”

Ahead of the above announcement, Iranian Foreign Minister Mohammad Javad Zarif called for designating US forces in the Middle East a terrorist organization as defined by Iran’s “Countering America’s Human Rights Violation and Adventurous and Terrorist Actions” law enacted in 2017.

The Pentagon, White House, Congress, CIA, NSA, FBI, DHS, NED, USAID, and other US agencies are terrorist organizations – aiming for world conquest and domination, wanting all nations worldwide bending to Washington’s will – brute force and other terrorist tactics used to enforce it.

The Trump regime is waging war on Iran by other means, similar to its actions against Venezuela, Cuba, and other countries, wanting their governments toppled, their nations transformed into US vassal states.

These countries are a significant counter-force to US aims for global dominance, along with Russia, China, and other nations – aiming to preserve and protect their sovereign independence from US aims to eliminate it.

â€˜I would rather stay invisible than be targetedâ€™ 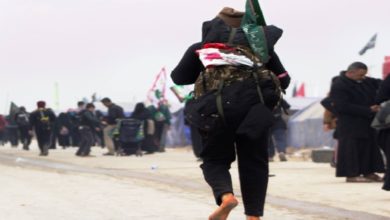 A Guide for Walking to Imam Hussain a.s