Lebanon’s Saad Hariri took a trip to Saudi Arabia recently, nearly a month after President Michael Aoun asked him to form a government on the heels of the parliamentary election.

Although the visit to Riyadh is announced pre-scheduled, his rushing to make it is seen as surprising. Because he still has a lot to do in Beirut, including extensive debates with the various parties to form his new cabinet. Still, he chose to go to the Arab kingdom ostensibly in compliance with his prior plan. But there is evidence that he did not travel to meet his work schedule, rather he reportedly traveled to Riyadh with a recall by Saudi rulers.

Last week, French President Emmanuel Macron in a televised interview revealed behind the scenes of the last November resignation of Hariri. Later last year, Hariri visited Riyadh. To the surprise of all, he appeared on Saudi-run Al Arabiya news channel and announced resignation from the Saudi capital. During his speech, he attacked Iran and Hezbollah. The announcement created tense political climate inside Lebanon. The Lebanese factions embraced the development with doubt. Still, this made them unprecedentedly united in their anti-Saudi criticism. Macron mediated at the time and the crisis ended.

The French president has recently blown the gaff, saying Hariri was detained in Riyadh in November and if it was not for his mediation, Lebanon could slide into a civil conflict. Undoubtedly, Macron’s disclosure after the election and in a time when Hariri is tasked with forming a government is not for nothing. In fact, the French leader wanted to make sure his revelation will not negatively impact Hariri’s vote and cut his supporters and allies. Now Macron reminds him of his favor. The best label to this Macron’s move is “blackmailing”, though telling the truth to this extent is considerable. After all, during the crisis, he visited Saudi Arabia and persuaded Saudi Crown Prince Mohammed bin Salman to release Hariri. This was not a big favor only to Hariri but also to the Arab monarchy because he got Riyadh out of a highly dangerous diplomatic impasse and minimized the harms.

Aware of Macron’s intention, Saudi officials first mildly responded to exposure of November events’ backstory. Then, Saudi Foreign Minister Adel al-Jubeir met with director of the Middle East and North Africa affairs at the French foreign ministry. The aim was to offer privileges as a backhander for Macron’s silence. But it appears that these two measures are felt by Riyadh far from face-saving. So, next move was to recall Hariri to the Saudi capital to whitewash the French revelation’s negative effects.

But many analysts agree that Hariri’s show visit can neither heal Macron’s divulgation effects nor cover up the truth about blatant Saudi meddling in Lebanon’s home affairs. Saudis arranged Hariri detention so naïvely that even its slightest details are hardly coverable. New York Times, for instance, publicized a full account of the happening and told of Saudi objectives. The American daily reminded of a meeting between top advisor to Iranian leader Ali Akbar Velayati and Hariri on November 3, saying the meeting dealt the last blow to Saudi sway in Lebanon. A few hours later, NYT continued, Prince Mohammad asked the Lebanese Prime Minister to travel to the kingdom. When arrived there, he used his own car to ride to the crown prince’s palace. He had to deal with violent behavior of Saudi police officers, according to NYT. Now, he has responded again to the Saudi summoning, though this time he faced no disrespect.

But the face-saving show is not the only reason for Hariri to visit Riyadh. Saudis seek other goals, apparently not irrelevant to Lebanon’s politics and government formation efforts.

A short but interesting report by London-based Asharq Al-Awsat Arabic newspaper unmasked the reality behind the recall. A day after Hariri’s departure to Riyadh, the Saudi-owned daily told of his demand for being granted additional ministerial share to the PM’s post, separate from the share given to his party Future Movement. His argument is that the PM should have a share in minister nomination, similar to the president’s right. Should PM and president seal a deal on the issue, 6 minister posts will be halved between the two. According to the present formula, the president nominates 5 ministers for cabinet and the PM 1.

With a look at the fashion of the Saudi-run newspaper’s report, we can come up with the notion that it bears a responsibility to express Saudi Arabia’s veiled proposal and dreams about the upcoming cabinet makeup rather than giving news about Lebanon’s politics. But the current minister-sharing formula is not subject to re-raising. Agreed upon by the Lebanese political factions, it has been serving since Taif Agreement, signed in October 1989.

Maria Aoun, a representative to Free Patriotic Movement (FPM) at the parliament, recently blasted the new demand, arguing that it will usher in a new chaotic share-seeking period in the country. Her warning very well reflects a challenge that can be triggered by Hariri’s demand and is prepared by the Saudis.

Saudi moves come alongside another scenario laid for the Christian parties. Riyadh takes advantage of the US allies in this way. The key player here is Samir Geagea, the head of pro-Western Lebanese Forces (LF) party. Two years ago, and following a failure to become president, Geagea signed a deal with Aoun to pave the way for Aoun’s presidency. The accord, dubbed Maarab Agreement, stood basis to reconciliation and cooperation between LF and Aoun’s FPM.

But after parliamentary election, Geagea party’s seats increased to 15 from 8 and thus he is no longer satisfied with the accord. Geagea now sets eyes on FPM’s ministerial share. His dreams began to crack the stable ties between the two and Maarab Agreement is now endangered.

Foreign media add fuel to fire. UAE’s Gulf News website has talked to a professor at American University in Beirut. The professor accused Jebran Bassil, FPM’s leader, of seeking to monopolize the Christian ministerial shares to drive the LF out of politics and exclusively take the Lebanese Maronite Christians’ leadership.

The attack on FPM is not unrelated to Saudi efforts to the advantage of Hariri demand. Riyadh and Washington are also allied in the case. The Lebanese Al-Akhbar newspaper journalist Wafiq Qansou mentioned this alliance in his report about a letter sent by Joseph Jbeily of Center for Lebanese Studies to the US Congress in which he called for pressures on Hariri to work with Geagea. Reminding of Geagea’s anti-Hezbollah tendency, Jbeily said LF leader’s power boost in government could marginalize Hezbollah and even disarm it. The letter proves that despite Hezbollah’s overwhelming win in last month’s vote, its foreign and home adversaries are in efforts to impair its Christian allies to block the reflection of its victory in cabinet formation. 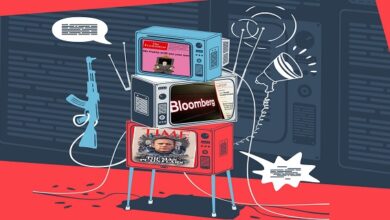 Ghadeer: Why did the Prophet leave it so late?