Sandinistas enter Managua, July 19, 1979. On July 18, a huge bomb blast killed or critically wounded several top Syrian security officials. While the â€œFree Syrian Army,â€ claimed credit, the highly sophisticated July 18 bombing in Damascus has the earmarks not of an operation by a recently organized paramilitary group, but instead of the CIA and/or the Israeli Mossad.

The bombing was greeted by U.S. Secretary of Defense Leon Panetta as showing â€œreal momentumâ€ for the Western-backed opposition in that country. The New York Times, in a July 19 front page article, extolled the opposition bomb makersâ€™ â€œhoningâ€ of their skills. The White House and State Department weighed in with similar, very thinly veiled expressions of approval.

It would be impossible to imagine similar sentiments emanating from Washington and New York policy makers and their corporate media propagandists in regard to a truly progressive or revolutionary movement. July 19 also marked the 33rd anniversary of the triumph of one such revolution, led by the Sandinista National Liberation Front of Nicaragua (FSLN).

Then, there was no praise for the FSLN in either the halls of Congress or in the capitalist media. The Carter administration engaged in a strenuous effort to prevent the FSLN from taking power against the brutal and thoroughly corrupt regime of Anastasio Somoza which had ruled the country for more than four decades. It was only the Sandinistasâ€™ fighting spirit, organization and sacrifice that ended the Somoza dictatorship.

The heroic achievements of the Sandinista fighters against Somozaâ€™s U.S.-created and armed National Guard were never hailed by the mainstream media here. No celebratory articles about how the youthful FSLN combatants were â€œhoningâ€ their skills to such a remarkable degree that they were able, while receiving little outside aid, to defeat the far-better armed Guard.

On the contrary, while there were tactical differences in ruling class circlesâ€”reflected in various competing newspapers, radio and TV networksâ€”there was consensus from day one on the aim: destruction of the Sandinista revolution. A July 10, 1979 New York Times article bluntly characterized the role of the U.S. â€œas final arbiter of Nicaraguaâ€™s political destiny.â€ It went on to say that the Carter administration, â€œhas indicated that General Somozaâ€™s resignation will become effective only when the U.S. is satisfied with the composition and political program of the successor regime â€¦ The U.S. had convinced him [Somoza] to delay his departure until it had, in the words of one U.S. official, â€˜neutralizedâ€™ the radical elements of the opposition.â€

By July 1979, the death toll stood at close to 50,000â€”mostly civilian victims of the National Guardâ€”in a country of fewer than 2.5 million people. Much of the country lay in ruins. But the Carter administration had no problem prolonging the fighting and adding to the already staggering casualties and destruction in pursuit of its aim: continued domination of Central America.

When the new FSLN government refused to bow to the dictates of Washington, the people of Nicaragua were subjected to a decade of deadly punishment. The U.S. allowed the criminal Somoza to bring the devastated countryâ€™s treasury with him when he was granted asylum.

Harsh economic sanctions were imposed on the country, one of the poorest in the Americas. The countryâ€™s main port was mined by the U.S. navy, and a total U.S. embargo put in place in 1985.

The CIA created, funded and armed a murderous counter-revolutionary paramilitary known as the Contras. More than 50,000 Nicaraguans died in the war that followed. The Contras’ tactics were murder, rape, torture and destruction. They killed doctors, nurses, teachers; burned health clinics, schools, co-operatives. Their thuggish leaders were wined and dined by Congresspersons and presidents.

Today, the CIA is coordinating the arming and many operations of the â€œFree Syrian Army,â€ vetting which forces should receive weapons. (NY Times, June 21, 2012) U.S. intelligence agencies and their counterparts in the former colonizers of the Middle East, Britain and France, along with Israelâ€™s, are undoubtedly doing much more. The Syrian National Council, a group mainly made up of long-time and mostly unknown exiles, is treated by the U.S. and its allies as a legitimate government-in-waiting.

U.S. leaders are 100 percent behind the armed FSA/SNC revolt in Syria for the same reason that they opposed the Sandinista revolution and supported the Contras in Nicaragua. They are confident that the victory of the Syrian opposition would be their victory as well, and another step toward full U.S. domination of the Middle East.

How Has Israeli Attack on Iraq’s PMF Backfired?

The wisdom of Ali (AS) 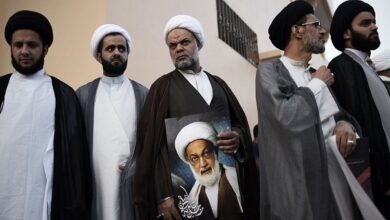