ANGER is rising in Saudi Arabiaâ€™s Eastern Province after security forces arrested and wounded one of the governmentâ€™s harshest critics, a Shia cleric called Nimr al-Nimr (pictured). Two young men were shot dead in the protests that followed. This takes the total number of Saudis killed since the start of the Arab spring a year and a half ago to ten, all from the Shia minority that makes up about a tenth of the countryâ€™s 27m-odd people.

Sheikh Nimr has long been a thorn in the side of the ruling family. A warrant for his arrest was first issued in 2009 after he said that if Saudi Shias were not allowed to â€œlive with dignityâ€, the eastern provinces should secede from the kingdom. Such talk is particularly inflammatory, since most of Saudi Arabiaâ€™s oilfields are in the east.

Yet he was not actually arrested. Security forces may have been mindful of the fact that some households in his town, Awamiyeh, were known to have stashes of guns smuggled in from Yemen and Iraq. Recently, however, the sheikh had again irked the ruling Al Saud family with a speech marking the death of the long-standing interior minister, Prince Nayef, who had also recently become the crown prince, as well as having been in charge of the religious police since 1975. The prince was hardly beloved by Saudi Arabiaâ€™s Shias, who saw him as more hostile towards them than his gentler half-brother, King Abdullah.

Saudi Shias feel they are treated as second-class citizens in a state that embodies a puritanical Sunni version of Islam. But the interior ministry dismisses unrest in the Eastern Province as â€œforeign meddlingâ€, a charge invariably laid against Iran, though Saudi Shias tend to revere Saudi or Iraqi clerics rather than Iranian ones. Prince Nayef was also a driving force behind last yearâ€™s Saudi-led military intervention in neighbouring Bahrain, where protesters mainly from the Shia majority had been massing on the streets to demand more rights.

Opposition Leader in Bahrain Shaikh Ali Salman was attacked at close range on 22 June, 2012 by Saudi backed Bahraini forces.
The late princeâ€™s long-standing deputy and half-brother, Prince Ahmed bin Abdel Aziz, who has replaced him, is not generally seen as a bringer of change. But some Shia leaders look more hopefully to Prince Nayefâ€™s son, Muhammad, the deputy interior minister, who is admired in Western government circles for pioneering a rehabilitation programme for captured or surrendering jihadists.

Sheikh Nimr told his followers in a posting on YouTube to celebrate Prince Nayefâ€™s death. Some young Shias even held parties. The sheikh said he was not afraid of being arrested and would even be willing to die if it helped his people to earn some dignity. The police soon responded, injuring him during his arrest. As pictures of his bloodied white robes circulated on social networking sites, young Saudi Shias took to the streets to shout for him and clashed with the police.

Some Shia elders wish the sheikh had held his tongue. After all, it was too soon for changes at the interior ministry in the wake of Prince Nayefâ€™s death to have taken effect. And some Sunni dissidents sigh that the government thrives on the sort of provocative statements issued by Mr Nimr, whom the Sunni majority in Saudi Arabia already finds easy to demonise.

The arrest of the Saudi sheikh came two weeks after Bahrainâ€™s Saudi-backed security forces wounded another popular Shia cleric, Ali Salman, who was raked with birdshot as he addressed a clutch of flower-holding protesters outside his home. This peaceful gathering was unlicensed, so it was technically a crime. But the sheikhâ€™s shooting was likewise a response to a speech he had made a few days earlier, when he said that Bahrainâ€™s Shias had yet to display half of their power and could bring thousands onto the streets, dressed for death, at the drop of a fatwa.

Mr Salmanâ€™s political group, Wefaq, won 45% of the vote in parliamentary elections in 2010, enjoying roughly the same level of support as Egyptâ€™s powerful Muslim Brotherhood or the Islamists that won a general election in Tunisia. Yet Bahrainâ€™s government routinely dismisses it as a group of traitors in thrall to Iran. The Saudis say much the same of their eastern Shias. Pointing a finger at foreign plots is easier than accepting the need for reform at home. 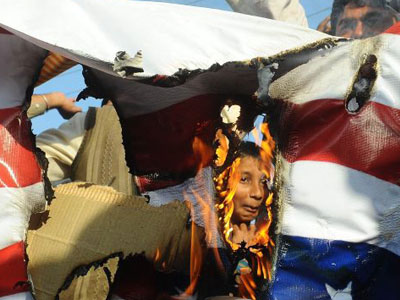 Carnage of Shia Muslims in Pakistan