The 7th Holy Imam Musa al-Kazim(a.s.) was the son of Imam Jafar as-Sadiq(a.s.), the Sixth Imam . The name of his mother was Hamidah , the daughter of a noble man hailing from the States of Barbary.

Imam Musa al-Kazim(a.s.) passed twenty years of his sacred life under the gracious patronage of his holy father . His inherent genius and gifted virtues combined with the enlightened guidance and education from Imam Jafar as-Sadiq(a.s.), showed in the manifestation of his future personality . He was fully versed with the Divine Knowledge even in his childhood. al-`Allamah al-Majlisi(a.r.) relates that once Abu Hanifah happened to call upon the holy abode of Imam Jafar as-Sadiq(a.s.) to ask him about some religious matters ( masa’il ) . The Imam(a.s.) was asleep and so he kept waiting outside till the Imam’s(a.s.) awakening . Meanwhile , Imam Musa al-Kazim(a.s.) , who was then five years old , came out of his house . Abu Hanifah , after offering him his best compliment , enquired: “O the son of the Holy Prophet ! what is your opinion about the deeds of a man ? Does he do them by himself or does God make him do them ?” “O Abu Hanifah” , the five years old Imam(a.s.) replied at once , in the typical tone of his ancestors , “the doings of a man are confined to three possibilities . First , that God alone does them while the man is quite helpless . Second , that both God and the man do equally share the commitment . Third , that man does them alone . Now , if the first assumption is true , it obviously proves the unjustness of God who punishes His creatures for sins which they have not committed . And if the second condition be acceptable , even then God becomes unjust if He punishes the man for the crimes in which He is equally a partner . But the undesirability of both these conditions is evident in the case of God . Thus , we are naturally left with the third alternative to the problem that men are absolutely responsible for their own doing .”

The Holy Imam Jafar as-Sadiq(a.s.) breathed his last on 25th Shawwal 148 AH , and with effect from the same date Imam Musa al-Kazim(a.s.) succeeded the holy office of Immamate as the Seventh Imam . The priod of his Imamate continued for thirty – five years . In the first decade of his Imamate , Imam Musa al-Kazim(a.s.) could afford a peaceful execution of the responsibilities of his sacred office and carried on the propagation of the teachings of the Holy Prophet(pbuh&hf) . But soon after , he fell a victim to the ruling kings and a greater part of his life passed in prison.

Imam Musa al-Kazim(a.s.) lived under the most crucial times in the regimes of the despotic `Abbasid kings who were marked for their tyrannical and cruel administration . He witnessed the reings of al-Mansur ad-Dawaniqi , al-Mahdi and Harun ar-Rashid . Al-Mansur and Harun ar-Rashid were the despotic kings who put a multitude of innocent descendants of the Holy Prophet(pbuh&hf) to the sword . Thousands of these martyrs were buried alive inside walls or put into horrible dark prisons during their lifetime . These depraved caliphs knew no pity or justice and they killed and tortured for the plessure they derived from human sufferings.The Holy Imam(a.s.) was saved from the tyranny of al-Mansur because the king , being occupied with his project of constructing the new city of Baghdad , could not get time to turn towards victimizing the Imam. By 157 AH the city of Baghded was built . This was soon followed by the death of its founder a year later . After al-Mansur , his son al-Mahdi ascended the throne . For a few years he remained indifferent towards the Imam(a.s.) . When in 164 AH he came to Medina and heard about the great reputation of the Imam , he could not resist his jealousy and the spark of his ancestral malice against the Ahl-al-bayt(a.s.) was rekindled . He somehow managed to take the Imam(a.s.) along with him to Baghdad and got him imprisoned there . But after a year he realized his mistake and released the Imam(a.s.) from jail . al-Mahdi was succeeded by al-Hadi who lived only for a yaer . Now , in 170 AH , the most cruel and tyrannical king Harun ar-Rashid appeared at the head of the `Abbasid Empire . It was during his reign that the Holy Imam(a.s.) passed the greater part of his life in a miserable prison till he was poisoned. Harun had the Imam(a.s.) arrested in the Prophet’s)pbuh&hf) mosque whilst Imam was praying. He was handcuffed and shackled and sent to Basra. Imam(a.s.) was put into prison under the custody of Isa bin Ja’fer. After a year Isa wrote to Harun saying he could no longer imprison Imam(a.s.) as he could find only piety and righteousness in him.

Harun had the Imam(a.s.) moved to Baghdad under the custody of Fadhl bin Rabi who too became a follower of Imam(a.s.). The prisons were so small that there was no room to stand and the food was a cup of water and two pieces of dry bread a day. Imam(a.s.) remained patient. Harun finally moved Imam in the care of Sindi bin Shahak (a very cruel man). Imam remained in prison for the last 19 years of his life.

The 19 years of imprisonment gave the Shia population a little relief as the rulers concentrated on Imam. It enabled the Shias to disperse from Arabia to Iran, India etc. thus spreading Islam and it was one of the factors towards the popularity of the 8th Imam.

As regards his morality and ethical excellence , Ibn Hajar al-Haytami remarks : “The patience and forbearance of Imam Musa al-Kazim(a.s.) was such .hat he was given the title of al-Kazim ( one who swallows down his anger ) . He was the embodiment of virtue and generosity . He devoted his nights to the prayers of God and his days to fasting . He always forgave those who did wrong to him , His kind and generous attitude towards the people was such that he used to patronize and help the poor and destitutes of Medina and provide for them cash , food , clothes and other necessitities of sustenance secretly . It continued to be a riddle for the receivers of gifts throughout the Imam’s(a.s.) lifetime as to who their benefactor was , but the secret was not revealed until after his death.

Time and circumstances did not premit Imam Musa al-Kazim(a.s.) to establish institutions to impart religious knowledge to his followers as his father , Imam Jafar as-Sadiq(a.s.) and his grandfather , Imam Muhammad al-Baqir(a.s.) had done . He was never allowed to address a congregation . He carried on his mission of preaching and guiding people quietly.

In 179 AH , Harun ar-Rashid visited Medina . The fire of malice and jealousy against the Ahl-al-bayt(a.s.) was kindled in his heart when he saw the great influence and popularity which the Holy Imam(a.s.) enjoyed amongst the people there . He got the Imam(a.s.) arrested while he was busy in prayer at the tomb of the Holy Prophet(pbuh&hf) and kept him in prison in Baghded for a period of about four years . On the 25th Rajab 183 AH , he got the Imam(a.s.) martyred by poison . Even his corpse was not spared humiliation and was taken out of the prison and left on the Bridge of Baghdad . When Harun Rashid’s brother Sulayman heard of this he was furious and arranged for his burial in a Quraysh cemetery outside Baghdad (the 8th Imam gave ghusl and kafan). A town grew around the tomb of Imam called Kadhmain (meaning the two Kadhims) since the 9th Imam is also buried there. 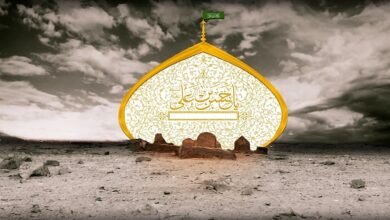 Martyrdom of Imam Hassan (as)