Back in 2014 ISIS occupied the city of Mosul which shocked the central government of Iraq. As a result of a polynomial equation, the terrorist group managed to dominate this metropolis by treachery of some military officials and Iraqi politicians.

However, the situation is quite different now. Many of the areas that were previously under the control of ISIS terrorists are now liberated and the number of ISIS occupied areas is constantly dropping. Different groups with different ethnicities have participated in operations against ISIS in many areas all around Iraq. This participation could be a manifestation of unity in the aftermath of war, but the ones in charge have a different future in mind for Iraq.

Currently, the liberation of Mosul and issues surrounding it have made headlines. Liberation of Mosul is important to Iraq in security, media, and psychological fields, in addition it could deal a heavy hit to ISIS terrorists. On this basis, some of the directors of the West Asian crisis are attempting to guide the situation present in Iraq to gain benefits in the aftermath of war.

US’ Card of Kurds

A scenario has been launched in certain areas of Iraq and Syria by foreign countries, especially the US. This scenario is a dangerous game that was started during the war and its final product is to be harvested in later years. Many of the Iraqi and Syrian Kurd leaders are seeking separation from the central governments and are willing and trying to be guided by foreign services. So, the card of Kurds plays an important role in this game. Currently, a portion of this game is played through the Mosul operation and US’ unilateral support of Kurds.

Even though the Peshmerga forces that are present in Mosul operations are in coordination with the central Iraqi government, they are receiving also support from the International coalition led by US. And on the other hand, the media coverage of the Peshmerga forces is so wide that in some cases it even casts a shadow on the role of the Iraqi army in operations.

But why has the US chosen the card of Kurds to play in the current crisis? And why is Washington acting this way in the current period of time and during the Mosul operation? The Kurds generally live in the four countries of Turkey, Iraq, Syria, and Iran, three of which are active in the axis of resistance and the front against the Israeli regime. Playing the card of Kurds could engage these three countries in another crisis to withdraw them from their primary goal. And in the case of Turkey, the Kurds are a leverage for US. So if in anytime Ankara decides to part ways with Washington, US is able to put pressure on Turkey.

Choosing the present time and the Mosul operation is also not without a reason. The liberation of Mosul is of importance to Iraq and its future, it also deals a heavy hit to the ISIS terrorist group. The forces that liberate this city, or take a bigger share of responsibilities in the liberation operation, will turn into national heroes after the war. So, this equation is not that complicated; US is trying to send more Kurdish forces into the war, to have leverage on the central government in the post-war era. Since the Iraqi Kurds already have autonomy, the next step cannot be anything other than complete independence from Iraq. But even if the Iraqi Kurds fail to achieve independence, US attains its objectives, so it is a win-win situation for Washington. Because if the Kurds succeed, US will be able to start secessionist crises in the West Asian region, and leave the area after planting the crisis seed. And if the Iraqi Kurds fail to separate the Iraqi Kurdistan from the central government of Baghdad, the issue of secession will remain in the area, and security crises will appear all around the region. 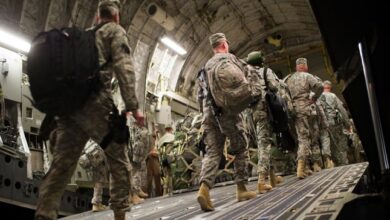 Will US troops leave Iraq?

Infographic: 5 Years on Bin Laden Death, What Remained of His Legacy 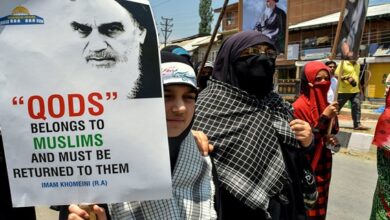 Intl. Quds Day: An existential threat to the hegemonic powers