The regional and international crises and their settlements or continuation have frequently been subject to the word powers’ interests which, in turn, are based on a set of political and economic calculations. The United Nations Security Council (UNSC) as a UN body was established to deal with issues threatening the global peace, and it is through this defined mechanism that the UNSC gains its credibility. In Yemen and Ukraine conflicts the UNSC has adopted resolutions in its course to find solutions for the situations in the two disputed countries. The resolutions obviously showed a credibility gap in the UNSC mechanism and suggested the notion superpowers have a strong effect on the UN body’s decisions.

Russia’s annexation of Crimea, decrease in Ukraine’s domestic conflicts and reaching a deal to hold elections in Ukraine’s eastern regions all come as an outcome of Russia’s monthslong tense disputes with the US and some European powers. Setting a certain strategic from the very beginning Mr. Putin has followed a series of pathways, including undermining Ukraine’s pro-west interim government favoring, inciting Russian-speaking eastern Ukraine citizens to ask for referendum and using its military power and militia forces in Crimea, to keep the West away from expanding towards Russian borders. President Putin has frequently dismissed warnings that he is crossing the US red lines.

Territorial factor is top in Russia’s strategy list and is as crucial as capitalism for the US in pushing for its interests. For Russia territory stands out as a key security factor, and in the same time it plays a key role in actualization of geopolitical goals. So, following territorial and geopolitical objectives is seen to be of significant priority for Russia.

President Putin views the US as a liberalized leviathan which seeks power centralization and domination over the world. Moreover, Mr. Putin on the one hand believes that a pro-west Ukraine could turn to a stepping stone for possible military actions against Russia in the future, and on the other hand is well aware that without Ukraine it is practically impossible to complete the chain of the countries making up the Eurasian Economic Union. Russia believes that the US disregards the international laws and bases its strategy follow- up on its military power.

There is a set of factors that enable Moscow to disregard Ukraine’s sovereignty, which includes strategic limitations, Germany’s need to expand trade ties with Russia and EU’s unavoidable dependence on Russia’s gas. Moreover, Obama’s exploitation of UN resolution which delivered support to former Libya dictator opponents, gave Mr. Putin a good pretext to take same action in Ukraine to support the regions seeking independence from Kiev.

In response, the US and the EU has imposed sanctions against Russia. Part of the sanctions targeted Russian and Ukrainian officials involved in Crimea referendum and annexation. Targeting Russia’s military, technology, oil and banking sectors, the sanctions are called a fresh cold war. However, the embargo failed to subdue Russia, but it helped hurt Russian troubled economy. Sanctions on Russian state banks are a serious threat to the country’s economy as Russia, due to sanctions, comes short with financial resources needed for following its energy projects. Additionally, Russian energy exports could not be crippled by the embargo, but the limitations imposed on technology transfer block Russia’s new northern regions oilfields use, leading to a fall in the country’s income from hydro carbonic products exports.

Responding to all these Western sanctions, Russia has taken a pathway based on which priority is given to domestic production capacity and reliance on internal technological potentials. For Putin, defending Russia and stepping safely out of the influences of the sanctions are a key success factors.

Contradiction between interests of Russia and those of the US and the EU and the exchanged sanctions between these powers have pushed them to find a solution and negotiate a deal out of the institutional mechanism of the UNSC. Talks among Russia, the West, Ukraine government and eastern Ukraine separatists resulted in ceasefire and exit of heavy artillery from East Ukraine. Other settlements, such as war captives release and elections in eastern Donetsk and Luhansk regions, were also agreed. The agreements later were passed within UNSC mechanism.

Passed by a unanimous vote with Russia abstaining, the April 14, 2015 UNSC Yemen resolution has come as a result of UNSC members’ overlapping and close interests and their agreement on limiting Yemen’s Ansarullah’ power and restoring the Persian Gulf region’s political and security power scale in favor of Saudi Arabia. The resolution, drafted by Britain and some Arab countries, dubbed as Arabic resolution, has such contents as Ansarullah exit from its controlled areas and asking for national dialogue.

Yemen has in its record several wars aiming to downgrade Shiite groups mounting powers. Undermining Shiites in the West Asia, and subsequently undermining the Resistance Axis and decreasing Iran’s influence over region are seen as the crucial and common superpowers’ goals that moved them to ratify Yemen resolution. The same superpowers’ interest accordance and unanimity is noticeable in Bahrain popular revolution which has received an impotent reaction from the UNSC. Bahrain human rights center report, published in November 2011, suggests that from protests onset in February to November, 45 people were killed and 1500 were detained arbitrarily, 1877 people were tortured and 500 others have been jailed as Political prisoners. Additionally, 40 religious places across the country were desecrated by the regime, and 500people were exiled and 477 students have been expelled from the schools. However, the reports show a rise in Bahrain revolution death toll, reaching 80, until 2012.

The UNSC inaction in face of Saudi-led coalition airstrikes on civilian places which have led to death of hundreds of civilians in Yemen notifies a realistic, biased and interest-based view of UNSC members in addressing international events. UNSC members’ definition of “world peace and security endangerment” is practically made by their national interests. Crises in Iraq and Syria and Israel regime war on the besieged Gaza and conservative and irresponsible UNSC reactions against the violence of the aggressors considerably show a biased UNSC definition of the cased endangering world peace.

UNSC’s inaction in the Arab world’s disputes stem from two basic reasons. The first is superpowers’ will to support their Arab allies to restore the power balance to its former shape, and to remove the forces fighting to change the status quo. The second reason is igniting proxy wars and consequently reducing the superpowers’ losses and expenses. With this they would have more opportunity to focus on their objectives across the world.

In the west Asia, which is laden with political conflicts and sectarian disputes, it is less costly for the world powers to guide the conflicts remotely rather than intervening directly. The case was different in Ukraine as it drew an immediate reaction. This is because Russia wants preservation of strategic influence in neighboring countries and the West seeks to restrain Russia’s power and press it in Ukraine. However, disputes between Russia and the West over Ukraine case, after months of exchanged threats and sanctions, resulted in striking a deal.

In total, the countries that were the world’s largest economies and were enjoying nuclear powers established the UNSC as an institution to preserve the so-called world peace. Therefore, any decision that is made by the UNSC is set in line with its major members interests.
The UNSC’s different reactions against Yemen and Ukraine cases showcase were due to overlapping interests in the first case and disputed ones in the latter.

Conflicting US- Russian interests in Ukraine case, after months of severe disputes, have led to a deal while the two powers’ accordant or at least overlapping interests have led to a resolution aiming to undermine and marginalize Yemen’s Ansarullah group that tipped the scale in favor of Saudi Arabia, to show that, even in such a formally global institution the decisions are directed by their makers’ national or their allies interests.

Clashes between Israel and Hezbollah and the “Iran Resistance Bloc” 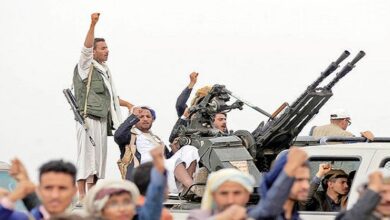 US Ban On Yemeni Ansarullah: What Are Goals And Effects?