One of the main frameworks used to discipline Muslims in contemporary times is good vs bad Muslim binary. This discourse is so pervasive, that we can find it within Muslim communities themselves. The discourse sanctions what forms of Muslimness are somehow accepted and which others are seen as a threat or have to be rejected. In a general sense, we can say that a good Muslim is someone who conforms to the logic of modernity, liberalism, and Westernization. A good Muslim also sees Islam as a belief and, of course, as having nothing to do with political.

The liberal project, the one that promotes the category of good Muslim, pretends to reform Islam in order to make it porous to the Westernization assault. The main goal is to destroy the anti-hegemonic Islam (the one we find in the Islamic Republic) and the political identity built around it. The result is an innocuous Islam, the one we can find in Saudi Arabia. An Islam that has no intention to change the world in a political sense.

The “bad Muslim” (the one who uses a discourse that seeks to re-center Islam within the public realm of the Muslim community) understands that political is a must in order to build a new world. A new world delinked from the West as a normative center. The “bad Muslim” knows that a non-political vision of Islam is a useless object, something powerless and at the mercy of Western grammar.

Imam Khomeini, the late founder of the Islamic Revolution, explained the difference between a non-political Islam (an Islam that can be accepted within the Western grammar) and an Islam that pretends to build an autonomous political identity:

“If we Muslims do nothing but engage in the canonical prayer, petition God, and invoke His name, the imperialists and the oppressive governments allied with them will leave us alone. If we were to say, “Let us concentrate on calling the azan 24 and saying our prayers. Let them come rob us of everything we own-God will take care of them, there is no power or recourse except in Him, and God willing, we will be rewarded in the hereafter”- if this were our logic, they would not disturb us.”

Imam Khomeini’s importance is paramount to understanding the West’s displacement as the normative model. His discourse is conducted exclusively in the language of Islamicate tradition, without reference to Western political doctrines. He wrote as if Western grammar didn’t exist. And that’s not a minor issue. That marked the possibility of Muslim political identity. A possibility feared by the liberal project and rejected by the “good Muslim”.

The “good Muslim” and the liberal project share the same goal of transforming Islam from within. The idea is to achieve a “moderate” Islam, totally compatible with the secular order and the West. But this transformation finds a huge obstacle on its way. After the Islamic revolution, the West got provincialized. In other words, the West cannot keep saying that political life can be only expressed in the so-called Westernesse, the native language of Western ideology.

In Iran, the destruction of the old order and the reconstruction of a new order were carried out under the sign of Islam. Thanks to that, Muslims were able to become world-makers and history-makers, debunking the Western myth that built them as people without history and without future. The main achievement of the Islamic Revolution was not the fall of the Pahlavi regime, but the decentring of the West.

The “bad Muslim” became the metaphor for all that Eurocentrism wants to expunge. It’s a useless attempt because the West cannot rebuild itself as the normative center. But regardless of that, the Western ideology presents “moderate Islam” as the antidote to the “bad Muslim” presence. In the Islamic Republic, we also have supporters of that vision, a vision that says that Islam is a “religion” and not governance (here a few names came to my mind: Soroush, Shabestari…).

The liberal-moderate Islam is an anti-political vision. And, as Imam Khomeini taught us, you can’t build a post-Western alternative, a new world, without a political. If we follow the liberal version we can only produce an intra-Western critique, but never an autonomous identity.

The bad Muslim, is the possibility of that new world, a world where the political category of whiteness, a system that privileges those who can express themselves in Westernesse, will be dismantled.

Who Are We Kidding? King Salman Proclaims Himself Grand Savior of Al-Aqsa 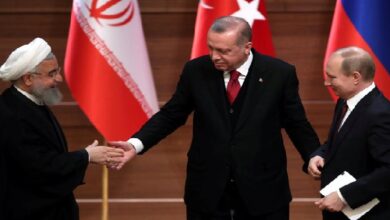 What Did Trio’s Syria Virtual Conference Focus On?