Keep Out of Yemen, all vicious autocrats, all agents of Zionism and the USA, and all suppressors of democracy!

Keep Out, all ghouls and monsters.

Keep Out, all those who have no rightful existence in a modern world, who are genetic throwbacks to medieval barbarism.  Nobody loves you. Everybody hates you.  Keep Out of Yemen!

Persian Gulf Arab States are calling on the United Nations to attack Yemen. With egregious hypocrisy they are calling for a decision under Chapter Seven which refers to the use of military force if there is any threat to the peace, breach of the peace, or act of aggression.

Yes, those States which are financing Daesh/ISIL, providing weapons and for decades have been, and are, promulgating the most gruesome and brutal philosophy in the history of the human race are claiming that democratic forces stirring in Yemen are a threat to peace.

Of course, to be fair, any democratic force is a threat to totalitarians like the Saudis who whip a man to within one inch of his life, wait a week, and then do it again and again, fifty times in all. And if an Indonesian maid is being raped and fights back she gets her head slashed off in the street.

Indeed, all decent people are finding out about the atrocities committed by these preening, primping, self-satisfied autocrats who think that their weekly shopping trips to Paris are an indication of their contribution to civilization. Yes, these are the creatures who want to intervene in Yemen.

Not long ago the Persian Gulf States were content because Yemen was ruled by Zionist and American stooges. Being stooges themselves, they liked to be surrounded by other stooges. So now they don’t like it when their political and military protectors, as well as themselves, are shutting down embassies because the Houthis, fed to the teeth with being marginalized and oppressed, have set up a presidential council and are taking power.

But one thing is certain ‒ the Houthis, determined to throw out foreign influences, particularly if those influences are American and Zionist, will not be flinching when faced by threats. The Houthis know that, for years, the West has been destabilizing Yemen and it is time for true Yemenis to provide the stability.  They kicked out Saleh the American puppet who ruled for thirty three years and will do the same to invaders.

Of course, with egregious hypocrisy, the supporters of Daesh/ISIL are claiming that they wish to intervene to suppress Daesh/ISIL. They dare to say that any Shia force is the same as Daesh when the truth is that the ONLY effective resistance to Daesh terrorism in the Middle East comes from Shia forces.

It is known that the USA and its Zionist allies, which include the Persian Gulf Arab States, are determined to destabilize and smash the independence of Islamic countries and they think they now have a chance to do that to Yemen. How dare they! They want to suppress all democracy just as, at the moment, the Saudis are in vicious occupation of gallant, plucky Bahrain. How dare they!

The forces of democracy in Yemen are really part of the Arab spring and, like the Spring, are facing counter-revolutionary forces. The West, of course, is supporting those forces.

‘a remarkable piece of history’

However, the USA and the UK, in particular, should remember a remarkable piece of history. In the 1820s South America was ruled by vicious, corrupt, Spanish colonial autocracies.  But the UK decided to back democratic forces in the overthrow of the autocracies.  They were overthrown and, to this day, the UK has had remarkably successful trade and political relations with country after country in South America.

Put simply, the West’s long interests are to be in normal, balanced relationship with democracies throughout the Middle East. But, instead, we are in corrupt relationships with hated autocracies.

Of course, the UK and American governments claim that their countries’ interests are at stake. Like the mechanical daleks in Doctor Who, they keep repeating, “Our interests, our interests….”

What interests?  Let them state specifically exactly what interests they mean.  In particular, let them state why the economic and financial success of the UK, for example, would be the less if those countries became democratic.

The truth is that when American and UK politicians refer to their countries’ ‘interests’ what they really mean are the gold coins slipped into their pockets or the jewels which are given as so-called ‘gifts’. These are not true gifts: they are bribes to maintain the corrupt Gulf status quo.

When is the UK, for one, going to stand up publicly and denounce these out-dated, spiteful regimes?  When it does so, it will suddenly find that its good name, now sadly tattered, has been restored and flies proudly. 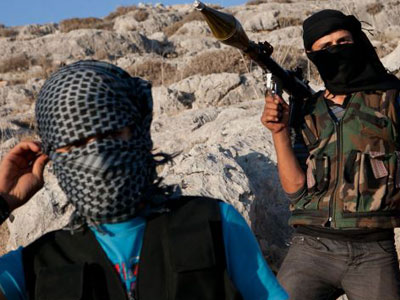