The economic crisis in Lebanon, manifesting itself in hyperinflation, hoarding of imports as the Central Bank announced subsidy cuts, and a severe fuel shortage that has caused huge lines at petrol stations is not a sole problem of domestic “corruption,” but rather a manufactured campaign of economic pressure against Hezbollah.

Just as Lebanon was the historic experiment for neoliberal incursion into the Middle East, the blockade-like conditions imposed upon Lebanon serve as warnings to the rest of the global south subsumed by neoliberal capitalism.

Since 2019, fuel prices have skyrocketed when dollar reserves ran low and capital controls began to be imposed upon depositors of local commercial banks.

In recent months, the effects of the crisis have reached new depths when impending cuts to fuel subsidies amidst the dollar scarcity encouraged hoarding of fuel. Stockpiles of hoarded fuel have been found in numerous areas, including Tleil in Akkar, Zahle, Zgharta, Saida, Nabi Osman in Baalbek, Jeita, and in Jbeil. Over 150,000 tons of hoarded fuel were found at a gas station belonging to Ibrahim Sakr, a leader in the US allied Lebanese Forces, where he was planning on selling at subsidized rates to card carrying members of the Lebanese Forces.

In recent months, the US and its allies have done everything in their power to ensure that the blockade-like conditions in Lebanon continue to wage their chokehold on the country. In April, a planned meeting between the Iraqi Prime Minister Mustafa al-Kazemi and Lebanon’s acting Prime Minister Hassan Diab to sign an agreement to secure oil for Lebanon fell through when Americans pressured Kadhimi to cancel the meeting with Diab to release the petrol.

In 2019, Iran demonstrated its ability to break the siege of Venezuela by delivering fuel aid in tankers to Venezuela across seas. It’s no surprise that Lebanon, Iran’s neighbor relatively speaking, would not be out of reach.

In June, Hezbollah Secretary General Sayyed Hassan Nasrallah vowed that the party would import fuel from Iran if the sanctions persisted, adding that the logistics were already in place for the fuel deliveries from the Islamic Republic.

Since then, three tankers have taken off from Iranian waters, one already having reached Syria. In order to circumvent US sanctions, the tankers will stop in Syria before fuel being transported by trucks to Lebanon.

On September 3, Iranian Foreign Minister Hossein Amir-Abdollahian stated his willingness to provide more fuel to Lebanon as needed in a phone call with Lebanese Foreign Minister Gebran Bassil, with the two agreeing to expand ties between Iran and Lebanon.

The US realized its major loss in terms of effectively maximizing the intended impact of its economic pressure on Hezbollah. The economic pressure enabled Hezbollah to turn certain areas more towards economic self-sufficiency. At the same time, easing up the economic pressure would not have made the US’s role apparent in facilitating the conditions of the crisis, but would have nullified its own pressure campaign.

In response to Nasrallah’s original declaration in an August 16 speech that petrol would be brought in in broad daylight, the US ambassador announced that the US would support an “alternative” energy program.

Rushing to supply Lebanon with Jordanian electricity and Egyptian fuel through Syria, US Ambassador Dorothy Shea said that Lebanon needed “real” and “sustainable” solutions – that conveniently came in response to Nasrallah’s August 16 speech where he vowed to bring in the fuel in “broad daylight.”

In a speech soon after, Nasrallah mentioned this as evidence of the US’s guilt in waging the sanctions. By proposing to install an alternative energy infrastructure that passes first through Jordan and Egypt, the ambassador revealed the US role in the Caesar Act’s effects over Lebanon and of the US-imposed currency and energy crisis.

Syria agreed September 4 to transport Jordan’s electricity and Egypt’s gas to Lebanon – something Nasrallah doubted – but the approval came as the first tanker was hours away from Lebanon and two others were days into their journey.

On September 1, a Congressional delegation to Lebanon, led by US Senator Chris Murphy, assembled in reaction to the incoming Iranian fuel imports, which at the time of the meeting were moving past the Suez into Lebanon.

Democratic Senator Richard Blumenthal said that Lebanon shouldn’t have to “depend on” oil imports from Iran. Yet the breaking of the blockade by Iran actually is relieving Lebanon of the consequences of dependency on the US dollar and Western imports. Thus, the only “damaging consequences” Blumenthal speaks of are not “reliance on Iranian oil,” but the damage to the US’s ability to strangle other countries economically. The delegation, arriving to threaten Lebanon with sanctions should it import the Iranian petrol, was the sore loser in this case: neither the fast-tracked Jordanian energy and Egyptian gas nor further economic sanctions could outpace or nullify the blockade-breaking assistance sent by Iran.

The import monopolies in Lebanon, also an effect of the US economic hegemony, is also existentially threatened by the Iranian fuel imports. The arrival of the congressional delegation signaled the desperate position in which the US is finding itself in Lebanon, especially after its withdrawal from Afghanistan and impending withdrawals from Syria and Iraq.

As the war on Lebanon shifts from military to economic, designed to “humiliate” and “subjugate,” Hezbollah has proven its adaptability to deterrence in both dimensions. Daring the US or the Zionist entity to attack the tankers, Nasrallah emphasized that any attack against Hezbollah’s economic intervention in the fuel crisis would signal the military kiss of death for the Zionist entity, ironically equivocated through the cowardice of economic and political pressure.

The Qualities of the Shia in the View of Imam Reza (A.S.) 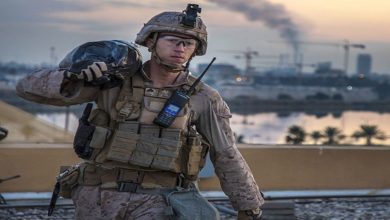 Is US readying itself to re-invade and occupy Iraq?

From Karachi to San Bernadino: In Quest of an Alternative Discourse on Terrorism