The social networks free discussion contrasts with Riyadh’s official line on the rise of radicals, “Patrick Cockburn” wrote at THE INDEPENDENT.

Twitter provides one of the few forums in which Saudis can discuss what they really feel – and it says they blame the clergy for Isis.

What is the connection between Saudi Arabia and the rise of the Islamic State (Isis) militants? Did the Saudi state and the Persian Gulf monarchies foster the growth of Isis and other jihadi movements in Syria only to find they had created a Frankenstein monster that today threatens the political status quo? Is the House of Saud itself in danger? Such questions are increasingly asked around the world, not least in Saudi Arabia, as the government appears to reverse course by joining the US-run bombing campaign against Isis in Syria.

How do people in Saudi Arabia, outside the ruling elite, view Isis and its demand for their allegiance? Ordinary Saudis are best placed to judge the extent to which Wahhabi ideology, the Wahhabi clergy and the Saudi education system have contributed to the creation and growth of Isis. Hitherto, the rigorous control of media and information in Saudi Arabia has meant that popular views, dissident or approving, are seldom heard.

Control over opinion is tight, but it is not total. Twitter provides one of the few forums in which Saudis can discuss what they really feel, which may explain why use of Twitter is more common in the Kingdom than in the US or China, taking into account the different levels of population. A fascinating analysis of attitudes to Isis in Saudi Arabia, as revealed by tweets, has just been carried out by Dr Fouad J Kadhem, a researcher at the Centre of Academic Shia Studies in London, in a draft paper to be published soon.

Many, though by no means all Saudis, applauded during the summer as Isis swept through northern Iraq and eastern Syria. Mani’a bin Nasir al-Mani tweeted approvingly: “The great land of Allah belongs neither to kings nor to nations. Those who deserve the caliphate are those who implement the Sharia of Allah on the earth and on people.
Apostates and traitors deserve nothing but the sword.” Later, al-Mani himself goes to Syria to join the forces of Islamic State.

Those commenting on events in the months since Isis took Mosul on 10 June are conscious that Saudi Arabia will not remain immune from the crisis. One hashtag is titled: “what do you do if Isis enters Saudi Arabia”. It should be explained that tweets refer to Isis as “Daesh”, after the Arab acronym of its name, or simply to “Islamic State”.
Supporters of Isis often express antagonism towards the Saudi government and suggest that Isis has many sympathisers within the Kingdom. Abdul Hakim al-Falih writes that “by the will of Allah, Abu Bakr al-Baghdadi [the leader of Isis and self-declared caliph] accompanied by the soldiers of the Islamic caliphate, to teach the [Saudi] police a proper Eid [religious festival].”

If there are Isis supporters in Saudi Arabia, how numerous are they? A person calling himself Azf Minfarad declares “no need [for Isis] to enter …Our country is full of them”. A similar point is made by “Fata al-Arab”: “Islamic State is on the Saudi borders and its supporters inside Saudi Arabia are more than its organised members and armed fighters.”
With regard to the ideology of Isis, several people comment that this has long been present in Saudi Arabia. “Luma” says: “It’s normal: all our life we have lived with Isis and its thoughts, its schools and its curriculum.”

Evidence of the similarity between Wahhabism and Isis is that in the third of Syria seized by Isis, it is plagiarizing Saudi textbooks for use in schools. A few Saudis think there is poetic justice in the threat facing their country, one person calling himself “Aqil Hur” (Free Mind) saying simply “magic rebounds on the magician” or, in other words, the tables have turned.

Education and religious policy – and the Wahhabi clergy – are widely blamed for spreading extremism. Souad al-Shimmary replies to his own question “Where did Daesh come from?” saying “it’s our product returned to us”. Rajah al-Jihni puts the blame squarely on the education system in Saudi. He says, “your schools are the ones that produce Daesh … what are you waiting for when you seek this educational policy?”

There are interesting critical comments about the case of Faisal Shaman al-Anizy, a Saudi doctor who joined Isis in Iraq. Many condemn him for taking part in fighting against innocent people and blame Wahhabi preachers for turning him into a suicide bomber. Abdullah al-Kwalit tweets “you [the Saudi government] should punish these snakes [preachers] … Allah dam[n] them”. And Halimah asks what was it that turned “a doctor who treats patients into a killer who bombed the bodies of innocent people”.

The Wahhabi clergy are not given to self-criticism, but Adil al-Kalbani, a Wahhabi shaikh, who has for many years led prayers as an Imam of the Holy Shrine in Mecca, says that “Isis is a Salafi [fundamentalist] offshoot … a reality we should confront with transparency”. Commenting on this admission, Abu Hamza al-Masa’ary says that “IS” is the fruit of “the tree of Wahabi preaching”.

But it is the Saudi education system that critics return to again and again. Wael al-Qaim says “they did not teach me that one day what we are learning will be implanted by Daesh and its offshoots”. Somebody else suggests the Saudi state borrow a curriculum from neighboring Oman which teaches “tolerance and religious pluralism” in order to eliminate Isis ideology. A more radical commentator, “Arabic Batman”, says changing the education curriculum is not enough and instead calls for “kicking the al-Saud out of the country”.
Tweeters from Saudi Arabia’s Shia minority say that they feel excluded and discriminated against. One recent issue is a Saudi Ministry of Education order to withdraw a book designed for elementary schools that accidentally showed a Shia religious man on the front cover. Naji al-Zayed says that “the good thing about this incident is that it revealed the hypocrisy of [the claim there is] equality among [Saudi] citizens and the reality of sectarian discrimination”. To this, Nidhal Mom writes, “as a Shia … they were fair to me, as they taught me that I am an infidel, libertine and it’s their obligation to fight me”.
There are signs that in the past few months the Saudi state has become even more rigorous in enforcing Islamic law – sharia – and clamping down on non-Muslim religious practice, possibly to show that it is no less committed to sharia than Isis. In August some 22 people were beheaded, including one man who was accused of “sorcery” and another who had been diagnosed as mentally ill, compared with 79 last year. On 5 September, Saudi police raided a house in Khafji, near Kuwait, charging 27 Asian Christians with holding a church service. Many Saudi tweeters were outraged by this, Shadyah Kazandar asking “will we tolerate raids on our mosques, which are located in every corner of the globe”.

Dr Khadem says the significance of the Twitter discussion is that “the extremist trend within Saudi society” is still very active. But liberal and moderate Saudis are increasingly confident enough to make their voices heard. 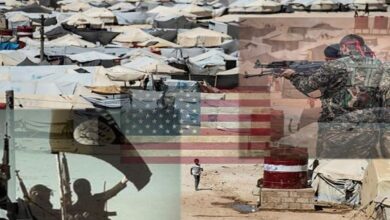 Evacuation of al-Hol Refugee Camp; a Ticking Bomb for Syria and its Neighbors

World’s Biggest Pilgrimage Now Underway, And Why You’ve Never Heard of it!