The presence of the American military forces in Iraq and the behavior of the staff of the US embassy in Baghdad have been the top causes of the obsession of the Iraqi political parties and observes after the defeat of ISIS terrorist group in the country two years ago. In early May, the US Department of State issued an order asking the non-emergency staff to leave Baghdad and Erbil diplomatic representations. The US embassy cited security reasons behind the decision to reduce its staff in Iraq. At the same time, the US called on American citizens to avoid unnecessary trips to Iraq.

The recent scandal of the CIA recruitment of Mahmoud al-Falahi, a senior officer of the Iraqi army and the commander of Al-Anbar operation who supplied intelligence related to the voluntary Popular Mobilization Forces (PMF) to the American embassy, is certainly the main reason for Washington to send intelligence elements to the embassy to replace the ordinary staff. After all, the American officials now feel certain the seriousness of the threats of Iraqi response to their continued military presence on the Iraqi soil. They begin to see anti-American sentiments growing strong among the Iraqi public.

By the new decision, Washington appears to seek to prevent disgrace suffered by its embassy staff and avoid revelations about spies linked to its embassy personnel. Furthermore, the State Department seems to have concluded that ordinary diplomats cannot advance predominantly interventionist plans in Iraq and there is a risk of their info being leaked during espionage operations. So, replacing them with intelligence figures, who have passed special courses to develop the needed expertise, will be efficient for Washington’s spying plans in the country.

The new staff with intelligence and security training backgrounds can contribute to penetration in the Kurdish region and recruitment of spies that can help the US better run its policy in Iraq. The main goal is to guarantee the security of the Israeli regime. This is done through, on the one hand, paving the way for Tel Aviv to get a toehold in northern Iraq and on the other hand collecting data on the PMF and supplying it to Tel Aviv for attacks on them when the need arises.

US position in Iraq falters

Sending new staff to represent the US interests in Iraq also can be a result of a conclusion that Washington has begun to lose its position in Iraq. As it is well-known, after the ISIS terrorist group was defeated in Iraq, the political parties argued that the Americans have no further pretext to keep their forces in the country. The anti-American move was completed by a debate in the Iraqi parliament calling for the expulsion of the foreign troops from Iraq. The parliamentary motion is exactly aimed at the Americans. The lawmakers insist that the government should set limits to the Americans’ activities in Iraq and force them out if needed.

From another perspective, the Trump administration, engaged in tensions with Iran in a regional setting, finds its position highly at stake as the Islamic Republic earns increasing support of the regional people who are already infuriated with the American atrocities and destabilizing actions in the region. Washington is well aware that Tehran has a great deal of support regionally. It knows that the Iran-led Axis of Resistance’s elements are stationed close to the US military bases and can easily materialize their threats against the military and diplomatic personnel if they choose to.

The White House knows that it has no place in Iraq. Its forces are under threat and the Iraqi people and politicians find them unfavorable elements who should leave the country amid clear signs that the US meddling has now reached an alarming level. The US decision-makers now understand that with the old pathways they can hardly drive their policies in Iraq. So, they need to adopt new ways. Even levels of military clashes between the Iraqi popular forces, who are opposed to the continued occupation of their country’s territories and military bases, and the American troops are not unlikely. An outlook of such confrontation persuades the Americans that they need to replace their diplomatic personnel in Iraq to shift to hidden activities.

-US forces in Iraq

Why Is ISIL Still Connected to Global Financial System? 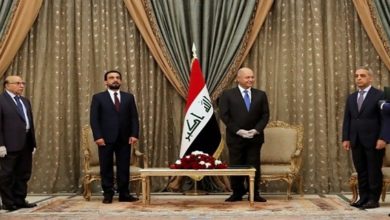