Shiite News: Vice Chairman of Majlis Wahdat Muslimeen (MWM), Pakistan Allama Syed Ahmad Iqbal Rizvi has said in his Twitter message that the Islamic system is practically implemented in Iran and the existing laws are derived from Quran and Sunnah.

Hijab is obligatory on women in the Qur’an and Sunnah, which is why it is a part of Iran’s law. In this sense, hijab is an order from God, which cannot be removed by any human being.

He further said that it is surprising to those Muslim journalists and intellectuals who are giving statements in support of the colonialist movement against the veil in Iran that not wearing the veil in Iran at this time is a sign of resistance, it is not from the Iranian system but from Allah, and the Messenger (SAW).
Opposing Hijab is a war with the Prophet (PBUH) and the Qur’an. 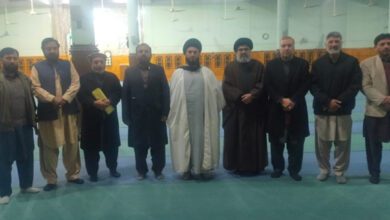 Pakistan to take the blasphemous caricature issue to UN and OIC