Shiite News: Speaking on the occasion of the bails of the mourners in District Kachhari, the district president of Majlis Wahdat Muslimeen (MWM) Multan, Allama Waseem Abbas Masoumi, has said that it is a crime under which law to participate in the processions on the occasion of Chehlum Imam Hussain (peace be upon him) ?
The Punjab government and especially the Multan administration should end the cases against innocent mourners immediately.

He said that most of the cases in Punjab have been filed in Multan, although the people of Multan have participated in the processions in a peaceful manner.

The Punjab government and the Multan administration should review their biased actions otherwise MWM will start a series of protests.

Allama Waseem Abbas Masoumi said that we demand the government that false cases against mourners should be dropped immediately otherwise the responsibility of the situation will fall on the administration. 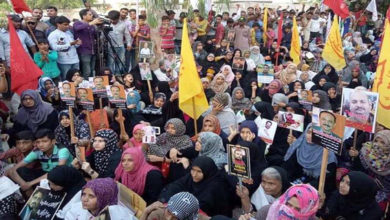