The properties of thousands of families have been destroyed. Women, children, old and young are sitting under the open sky at this time.

Hundreds of people have lost their lives. Pakistan is going through one of the biggest human tragedy in its history. People are not getting a place to bury the dead bodies.

While the rulers of the country are engaged in power struggle and political warfare.

“The government, opposition, political parties and elected representatives have not been able to inform and help the oppressed victims. This is the time to unite and save the country and the people” maintained MWM leader.

He apprised that the Central General Secretary of Majlis Wahdat Muslimeen Pakistan along with the provincial president and cabinet members are currently on a visit to the affected areas.

While the workers of MWM provincial, district, tehsil and units are helping these rain and flood victims in every possible way. We have set up relief camps for the victims at various places. Our helpless countrymen should not be left alone in this hour of difficulty.

The government should immediately convene a donor conference to deal with this emergency.

He said that cases have been registered against the mourners by declaring the Azadari-e-Imam Husain (A.S) as a crime in the country.

The Constitution of Pakistan clearly and unambiguously guarantees religious freedom and fundamental rights to the citizens of Pakistan.

We want to know about the black sheep of Yazidi mindset sitting in the government, police and administration who are angry at the Majalis of Nawasa-e-Rasool and they file FIRs on mourning gatherings held within the four walls and the Imambargahs. Despite the clear orders, they put obstacles in the mourning for Imam Hussain A.S.

These FIRs are a serious violation of the Constitution of Pakistan and an attack on our religious freedom which cannot be accepted under any circumstances.

He said that the Ministry of Human Rights of the Government of Pakistan has taken strict notice of the registration of FIRs against Majalis-e-Aza and admitted that it is a violation of the Constitution of Pakistan, civil rights and human rights. It has been declared as a serious violation of international laws.

With this initiative, the Ministry of Human Rights has truly expressed the sentiments of millions of Pakistanis along with the Constitution of Pakistan.

We demand that the cases against Majalis-e-Aza and Jaloos-e-Aza should be withdrawn and those elements in the administration and police who have carried out this shameful act be called to account.

In Islamabad Karachi company police station, the people of the banned terrorist group, whose names are in schedule four arrive with a procession and on their wish, a case was registered against the leading scholars known for Ittehad-ban-ul-Muslimeen, although the participation of schedule four elements in a rally is a legal offense.

Demanding registration of cases against them are the same elements who want to inflame religious hatred in the country. 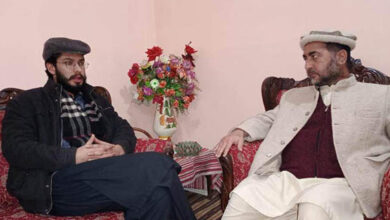