Shiite News: The United Nations Organization (UNO) issued a report consisting of the details of Takfiri terrorists who joined ISIS from all over the world to fight against the Constitutional Government of Bashar Al Asad in Syria to safeguard the imperialistic interests of the USA and its allies. This report not only reveals the numbers of foreigners who joined ISIS in Syria but also who died for hell, were arrested and escaped in which thousands of Pakistani are also included.

According to the said report, 4600 Pakistanis with Takfiri mindset were associated with an international terrorist group, ISIS in which 1380 were departed to hell and 590 are missing. Despite such a huge number of citizens who were fighting for an International terrorist group, Pakistani print, electronic and social media kept silent over this sensitive issue while the Hundreds of Shia had been forcefully abducted on coming back home from the pilgrimage of Iran, Iraq, and Syria in the accounts of Zainabyon a fabricated organization, titled by the Pakistani agencies.

UN report cited that 171400 foreigners entered Syria to join ISIS of which Turkish were in top numbers as 25800, while 5760 of them have been sent to hell while 380 were missing. KSA is in the second position with 24500 Saudis. 5990 Saudi terrorists including 19 women are now eternally burning in divine hell while 2700 have been escaped.

Pakistan-based Takfir who are fighting in Syria of ISIS reportedly belongs to banned Sipah-e-Sahaba, Lashkar Jhangvi, Jamat-e-Islami, Harkat Al Mujahideen (Ansar-ul-Ummah), and JUI. All of them were gathered under the flag of ISIS to topple the constitution Government of Bashar-ul-Asad just to safeguard the imperialism of the USA, and its allies including Israel and India.

We have lost trust in NAP and Apex Committee: Allama Raja Nasir Abbas 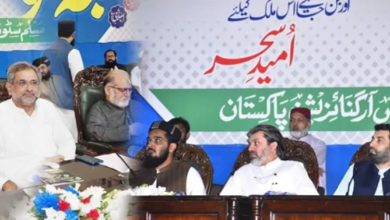 The state once again supports the Wahabi Terrorist organization in Pakistan