“We made our point, we took our steps and it’s up to the Qataris to amend their behavior, and once they do, things will be worked out but if they don’t, they will remain isolated,” Jubeir said on Tuesday, during a visit to Washington.

He added that if the Qataris wish to return to the Persian Gulf Cooperation Council, “they know what they have to do.”

Saudi Arabia, the United Arab Emirates, Egypt and Bahrain all cut off diplomatic ties with Qatar on June 5, after officially accusing it of “sponsoring terrorism.”

Shortly after that, the Saudi-led bloc of states issued a list of demands for Qatar to meet in return for a normalization of ties. Among them was that Qatar sever ties with Iran.

Doha was also asked to close down Al Jazeera — a media network that has reportedly been critical of the absolute monarchy in Saudi Arabia — shut a Turkish military base, and pay up “compensation” for “damages” from purported terror sponsorship.

“What has been presented by the countries of the blockade are merely claims that are not proved by evidence and are not demands,” said Thani after the meeting.

“The demands must be realistic and enforceable and otherwise are unacceptable… We agree with Washington that the demands should be reasonable,” he added.

On Sunday, Tillerson noted that some of the demands made by the four countries would be “very difficult for Qatar to meet.”

Trump urges Salman to find solution to standoff with Qatar 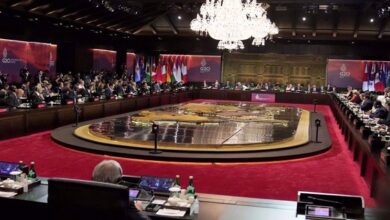 Saudi King Salman due in Indonesia on another lavish visit

What are Riyadh’s Drives for Presence in Africa?