According to police, Sub-Inspector Yar Mohammad was serving at the Gulshan-e-Maymar police station.

Sub-inspector Yar Muhammad, 54, was travelling on his motorcycle with another policeman Ghous Bakhsh in plainclothes.

The armed motorcyclists opened fire on him.

Malir SSP Irfan Bahadur arrived on the spot with a police team soon after the incident and gathered evidence from the area.

However, terrorists had earlier fled the scene after having murdered police officer.

Body of the deceased was shifted to hospital for medico-legal formalities.

Police say they are looking into the murder.

On Friday, a case pertaining to the murder registered at the Counter-Terrorism Department (CTD) under sections of the Pakistan Penal Code and the Anti-Terrorism Act, 1997, on the complaint of Bakhsh.

However, in a social media post, a banned terrorist outfit claimed responsibility for the murder of the police officer.

On the other hand, Pak Army soldier martyred as terrorists open fire at Bajaur security post.

A Pakistani soldier embraced shahadat after terrorists opened fire on the security forces at the border post in Bajaur.

Inter-Services Public Relations (ISPR) said this in a statement.

According to ISPR, Lance Naik Sami Ullah embraced shahadat after the terrorists opened fire at the security forces border post.

Pakistan Army chief vows to respond with full might if provoked

Pakistan gets another Daish commander from the ranks of Deobandi Taliban 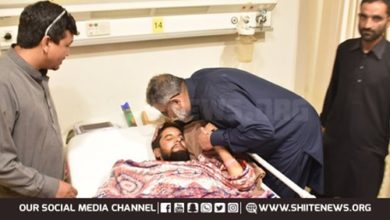