Secretary-General of the Lebanese Hezbollah Resistance Movement Seyed Hassan Nasrallah said that militants of the Islamic State of Iraq and the Levant (ISIL) would have reached Beirut had his party not sent its fighters to Syria.

“Had we not interfered in Syria at the appropriate moment, ISIL would have been in Beirut now,” Nasrallah said in a meeting on Sunday.

The Hezbollah secretary-general wondered why the party’s critics have not condemned ISIL’s advance on the Iraqi capital, Naharnet reported on Tuesday.
Nasrallah also lauded Iraq’s top cleric Ali al-Sistani’s call, saying it “aims at protecting Iraq and not just a single sect.”
The Hezbollah chief hinted that some regional and Persian Gulf countries were involved in the fighting in Iraq.
“Who is benefiting from what’s going on there?” he asked.
He also raised doubt about Washington’s stance as it weighs possible drone strikes against the militants.
Nasrallah expressed relief over the improvement of the security situation in Lebanon. But warned that “this does not mean things have gone back to normal.”
“We should always take precautions,” he said. 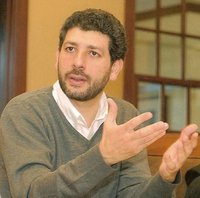